My Friends Are Questionable 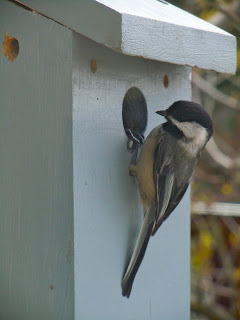 It’s probably spring by now. Birds are picking fights with each other, and some of them are–why, I believe they are wrestling. Dave built a chickadee house and situated it a foot away from my window where I do all my writing in order to facilitate the procrastination process. I was just up there today and no sooner had despaired of seeing our chickadee pair this year than they showed up. Same couple, too. One of them has that high, squeaky voice, and the other has that higher, squeakier voice. Each one took turns checking out the house, and then they sat on a nearby branch and got into a heated exchange, and I didn’t see anyone hauling in any furniture. I think one of them thinks it’s just fine and the other one is saying it’s too ratty-tatty and couldn’t they ever get anything nice for a change. The first one sharpened his or her beak on a branch and the seeds in the suet-cake trembled.

“I wonder if we should have cleaned out that nest box again,” I said to Dave. Oh jeez, there’s that look.

“I asked you if I should clean out the nest box three weeks ago and you said [higher, squeakier voice] ‘oh no, not now, it’s too close to nesting season, and maybe they’ll be put off by your scent or something.'”

I would very much like to refute this, without doing damage to the truth, but I can’t. I did just say that.

“And you always tell me I don’t even have a scent.”

Also true. The man can spend the day shoveling rocks in the sun and not emit a molecule of odor. It’s peculiar. I think he’s perfected flatulence just so people know he’s been around.

“Besides, there’s no reason you should ever have to wonder about such things. Don’t you know, like, a million birders?”

I do. Literally scores of them. They’re good people. I got to know their queen, Julie Zickefoose, through this here blog, and she alerted the whole flock. And then I also know Bill Thompson III, who is so accomplished he can spot invisible birds that don’t even exist–I’ve seen him do it. And I know Susan Kailholz-Williams, who wears hawks and owls like wrist corsages. For a living. I know Jeff Gordon, the  president of the American Excuse-Me Birding Association, and can tell you his winter range and what his legs look like. All of them have blogs. The birder blogs differ from mine mainly in the density of facts.

But that doesn’t mean I want to pester them every time I need to know something bird-related. No one wants to get the same questions over and over again. When I was a letter carrier, that happened all the time. “Hey, we can’t really call you the mail-MAN, can we?” “Hey, Uncle Sam, working hard or hardly working?” “Hey, dipshit, where the hell is my check?”

Teachers always like to say “there is no such thing as a stupid question,” but they don’t really mean it. And if I got started asking my friends questions, it would never stop. Chickadees can’t really tell each other apart, can they? They only figure out which one is the boy and which one is the girl when the egg falls out, right? Is there any reason I can’t put up about twelve birdhouses here outside my window a yard apart, or will the birds start writing nasty letters to the editor about infill? Why do scrub jays go SKREE SKREE SKREE SKREE all the ding-dang day long when everybody heard them just fine the first time? That is wrestling they’re doing, isn’t it? What wine goes good with scrub jay? What has yellow legs, purple wing bars, an orange eyebrow, an argyle vest, a slant-six and tailfins? What do you mean I must be mistaken?


What good are you?