My Very Own Desk 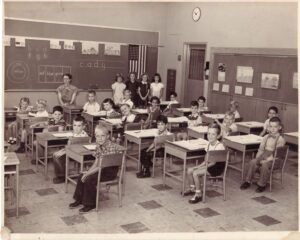 There’s a charity out there that provides school desks to children in Malawi. I didn’t even know it was a need. Shoes, food, books, computers, all that seemed more like the ticket.

But then again I never went without a school desk. When I think back, they really were pretty cool. For one thing, you got your very own. For a kid who didn’t have much in the way of possessions, having your very own desk felt affirming. Not only that, but every year you’d get new possessions, your own eraser, your own set of pencils and a pencil case, a black-and-white-mottled composition book, a protractor…it was just an extraordinary wealth of things that belonged to you, and you got to put them in your own desk that was yours for the whole year. You were Post-Toddling. You had Arrived.

But if you didn’t have your own desk, you’d have to sit cross-legged on the floor and remember everything. What could you carve your initials into? How would you scratch your nethers or excavate your underpants without anyone noticing? Where would you stick your gum?

I never had gum. So gum disposal was not important.

I think I remember where my desk was in Miss Whitten’s first-grade class. I believe I was three seats back on the right side of the room. Marooj Abass sat in front of me and borrowed my big brown eraser and returned it, smirking, in the form of a couple of crumbs. That was the first time anyone was ever mean to me, even though I had older siblings, and I had no idea what to do about it—the whole concept was foreign. I believe I just sniffled through the remainder of the day.

I’m not sure I ever got to be three rows back again until I was out of grade school. One way or another, I was in front. I was short, and my name started with a B. There was no hiding.

That first desk was wooden. In third grade they got fancy. We all had Formica-topped desks. I heard the Formica came from counter cut-outs for sinks. Even then that struck me as an ingenious use of resources. And your desk was different from everyone else’s. It might be a light gray with black boomerangs as opposed to a sunny yellow with orange boomerangs. The possibilities were endless.

There was a day toward the end of the year devoted to cleaning. You had to scrub out all the scribbles on your desk and scrape off the gum and boogers. And you had to go page by page in your textbooks erasing all the pencil marks you might have put in all year so someone could use them the next year. The books didn’t change much, I guess. Robert E. Lee was still the greatest Amurrican that ever lived and all the math was still old math.

In Junior High desks were different in that you didn’t get to keep your own all day long so some of the scribbling wasn’t yours, and there might be more dirty words involved. Gum was still not an issue but with the desk as a shield you could adjust your sanitary napkin belt surreptitiously. Or write notes about who you were in love with and try to pass them to your best friend across the aisle, except Mike intercepted it and ran around the class holding it in the air hooting and threatening to read it out loud until you just wanted to die, or get tall enough to snatch it back, which not only did not happen in a timely manner, it never happened at all.

I didn’t know about crotch-kicking at the time.

I’m not sure when the desks showed up that were all one piece with the desktop part of the side arm, but it does seem to be one more excruciating development for fat kids. That wasn’t my issue. My issue was getting big enough to snatch notes out of the air and pop Mike in the schnozz. He had an unusual name. I just looked him up. He’s a writer living in Hawaii. Isn’t that special?

Isn’t Hawaii due to go underwater?