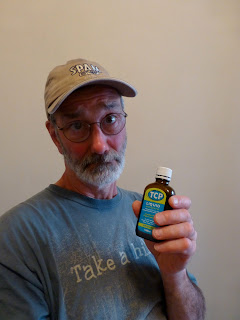 It takes about thirty-two hours to get to New Zealand from Oregon, the way we did it. I had a petite cold before we left and distributed the last delicate strands of it over the air circulation system of a series of airplanes, but it took Dave to make something manly of it, ramping up to a galloping bronchitis upon our arrival, where we met our traveling companion Betsy. Betsy has a raft of fine qualities. In fact she is very accomplished, for a woman who could totally have made it on her looks alone, but it was her stash of potions that really stood out at first. “You have a sore throat?” she said, animated, pulling out pharmaceuticals from her luggage like scarves from a clown’s sleeve. “Gargle with this. It’s really stinky, but it works great.” Instructions on the bottle echoed her advice, as well as going on to explain how to clear slow drains and repel mice. Dave performed a glum, heroic garble and went straight to bed in horror. Betsy funneled three thumb-sized capsules into him and tamped them down, and when he came out of the coma twelve hours later, he was measurably improved. We got set for a hike.

It was supposed to be a five-star beauty, through the bush [hee hee! they say ‘bush’], around a turquoise lake, with the promise of parrots, and the likelihood of biting flies. I was stoked about the parrots but Dave whimpered. “Oh, you attract bugs too?” Betsy said, animated. “I’ve got this amazing stuff. Wipe it on yourself. It’s really stinky, but it works great.” Dave wiped.

The remarkable Linda organized the whole trip as a sixtieth-birthday present for herself, which is making me rethink my own plan to splurge on socks for my own. Going anywhere with Linda is a ticket to miracles. For instance, she dramatically improves one’s odds of finding an insect with a tubular snout. There are wonderful things to see in any new place, but sometimes it’s the humdrum stuff that catches my attention. Right off the bat we were able to witness the southern-hemisphere Corolla Effect wherein all the cars circled the wrong way around the rotary. Fortunately we were chauffeured by Linda’s daughter Rachael, whose brain is still nimble enough to override habit. The signs facing us as we approached the rotaries said “GIVE WAY” instead of “YIELD.” Variations on idioms charm me, and I traveled the world’s rotaries in a daydream: “ACQUIESCE POLITELY” (U.K.); “SUBMIT” (China); “PREPARE TO DIE” (France).

Other road signs indicating locations with Maori names revealed that New Zealand is blessed with an abundance of vowels. This is usually good news. Your South Pacific nations have built entire languages around the prevailing human response to the weather, which is “aah, wow, wow,” as opposed to the poor consonant-encrusted Eastern European countries whose founders were reduced to “brrrr” and stuttering. Our friends had just come off a tramp near Te Anau (pronounced “taaah-wow-wow”) and snatched us up in Queenstown on Tuesday (pronounced “Wednesday”).

I was looking forward to new flowers, new birds, and new toilets. In my experience, every country has its own proud toilet tradition. My dream toilet would feature the display shelf that I saw in Germany forty years ago, the little balconies upon which you can admire your glistening output properly before whooshing it away. New Zealand toilets are light on display functionality, but they get their own room and have their own majesty. At the press of a button all contents are shot straight to the center of the earth where they remain for millions of years before being volcanically recycled. Unfortunately, I wasn’t able to demonstrate their powers right away. “You should poop,” Betsy advised. “It’s really stinky, but it works great.”