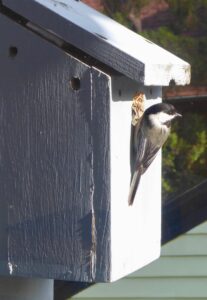 Danged if it don’t look like we’re at full occupancy here at Hopeful Birder Real Estate Development! We have authentic nuthatchery in the new red nest box and genuine chickadee action in the gray one outside my window. We would have had twelve nest boxes up by now but we are given to understand it wouldn’t work. Evidently most birds take social distancing very seriously and there’s only so much space in our yard. The boxes are on the opposite sides of the house.

I was pretty gassed about seeing the chickadees hauling in the mattress to the gray box. That’s the one I thought was being ignored because it doesn’t have any shade or shelter from a nearby tree. My new cascara tree was still a year or two away from reaching the second floor and then a freak April snowfall snapped the top two-thirds of it right off. Mother Nature can be a real shit sometimes. But someone is by-God going in and out of there and hammering away. I was super excited at first and then had what I now realize is an odd thought. I thought: I don’t know who you are.

I mean, in most cases you don’t know who they are. But we knew Studley and Marge and they knew us. These ain’t they. I don’t know a thing about them. Oh, I do, sort of, in that I know she will put together a grass and fluff mattress mid-to-late April and start sitting between four and twelve little speckled eggs in May and he’ll bring her snacks until Memorial Day when the kids will pop out and about two weeks later they’ll launch out and carom around the airspace for a few days and all like that there. I know that much. 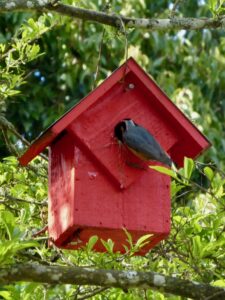 And I know they’re all Geminis.

But I don’t know them. What are their likes and dislikes? Do they like parties? Intimate evenings at home? Klezmer music? Do they identify as extroverts, like Studley?

I mean, they could totally be from California. Maybe they’re perfectly nice people who can’t help that they took a huge profit on their old nest-hole and rode an equity wave up here and they’ll think nothing of demolishing our nest box and putting up a new ostentatious one and drive a few more hard-working birds into homelessness because everything’s gotten too expensive. Most of the birds around here are working for minimum wage and it doesn’t go as far as it used to, what with all the non-native plantings and pesticides and cats and whatnot.

Or maybe they’ll be standoffish. Maybe they’ll disappear whenever we show up and then we have to wonder what we did to piss them off, and what’s the deal with young people these days, and how do they get off judging us?

Or maybe they’ll pump out a whole slew of kids and they’ll be noisy and they’ll leave all their toys in the front yard and have a loud dog. Probably not, them being chickadees, but the point is we don’t know them.