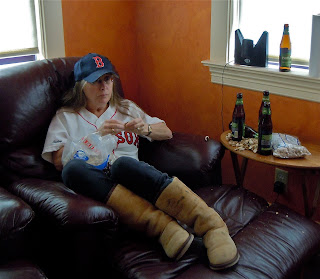 When I was working, I scavenged my breakfasts and lunches myself, and Dave took care of everything else. I ate exactly the same thing for breakfast and lunch because thinking irks me. On my days off I’d skip breakfast (too fussy) and have a peanut-butter sandwich for lunch (folded over, to save the hassle of precise bread-to-bread placement). Then the big dinner fairy showed up with a heaped plate of eighteen different vegetables, a slab of perfectly-cooked meat of some kind and all the food groups abundantly represented, including butter, salt and alcohol. We never get sick. All the vitamins are bound to be in there somewhere.

If Dave gets hungry of an afternoon, he might call out, “you want a little nosh?” and I’ll say, sure. A little something would be nice. Then ten minutes later out he comes with a plate of sliced apples, an orange, salami-cream-cheese-chili-pepper rollups, olives, crackers and cheese, with a spray of celery and carrots hanging off the side, all arranged so attractively that Druids could use it to line up the equinox. The man’s a whiz. Also, he doesn’t want to eat the same thing twice. 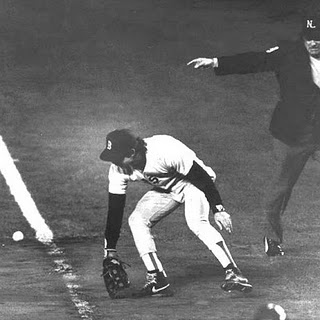 That whole variety thing goes to pieces during the World Series. For however many days it takes, we eat salted peanuts in the shell, Crackerjacks, hot dogs and beer. I really understand the game, having been well coached in softball. You can learn a lot from the end of the bench. In fact, you will not find anyone with my particular dearth of skills who understands this game any better than I do. I love it. Not enough to watch it all season, though. Every year there is some upstart team that I’ve never heard of that makes a run at the pennant. By the time I start paying attention, it will be down to something like New York versus the Amarillo Crabwhackers. Amarillo Crabwhackers? I’ll say, and Dave says, sure, they used to be the Minot Wheatwatchers. Oh.

I’m a Red Sox fan. I lived in Boston during the ’75 World Series, when Carlton Fisk waved his hit fair and hopped up and down and clapped all the way around the bases. I’ve even done a remodeling job on my memory so that I was there at Fenway watching, although I was really in Somerville in front of the TV, but you could hear the whole town roar at once. They didn’t win that year, of course. There’s a pain associated with being a Red Sox fan that is almost exquisite, a beautiful ache. It’s a concrete shoe for the heart. Victorians used to think there was something pale and sexy about tuberculosis sufferers, and I feel the same way about Boston fans. Yankee fans do not have the emotional stamina to withstand what a Boston fan can withstand. Staying with the tuberculosis-victim analogy, Yankees fans are, um, rich fancy boys who will not die.

The Red Sox messed up a few years ago when they accidentally won the whole thing, which wasn’t nearly as thrilling as getting into that series at all by coming back from 0-3 and beating the Yankees for four straight games. Since then there hasn’t been much to interfere with the purity of our suffering. This year the Texas Rangers humiliated the Yankees to get in the series, and they’ll be meeting San Francisco. I don’t care who wins as long as the Yankees didn’t. We’ve got the giant bag of peanuts ready to go. 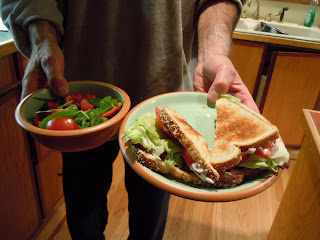 But this year the diet got screwed up early. About five minutes before winter, we got our first ripe tomato of the year, in October. That’s it: fifteen tomatoes all season, and we’ve put them to their highest and best use. That means we’ve already had BLTs every night for a couple weeks. When we run out of Ts, the Series will start. In deference to our age, we’ve reined in the menu by eliminating Crackerjacks. So it’s just peanuts and hot dogs and beer from Oct. 27 for about a week. I’ve got a massive case of diarrhea penciled in for the 29th through Election Day. I don’t care who wins, but my lower GI tract hopes they can do it in four games.