It’s possible you don’t care about our chickadees, Studley and Marge, but that seems so unlikely, I’ll tell you about them anyway. Our chickadees are in the chickadee manufacturing industry, and they’ve set up shop in the house Dave built for them and hung outside my writing room window. The first year we followed their progress avidly. Nothing against Dave’s carpentry skills, but neither one of us really expected to achieve chickadees just by putting out a house with the right size hole. So we were thrilled. Chickadees are interchangeable, not that we don’t think ours are special. No matter where we are, if we hear chickadees going off, Dave will ask if those are our chickadees. And I’ll examine them, for some reason, and then say yes. Why not? They don’t any of them veer off the template much.

Last year things didn’t go well. They showed up on schedule and moved in the bassinet and took turns popping in and out, but we never heard any peeping and no one ever brought in grubs. When we were absolutely sure we wouldn’t mess things up for anybody–around Christmas–Dave took a look inside and found some punctured eggs. We were very sad and hoped this year they wouldn’t have moved to a better neighborhood. But they didn’t. They scouted it out in March and started moving stuff in toward the end of April. By May two chickadees were definitely living in the box. One would stay in and the other would go for take-out. 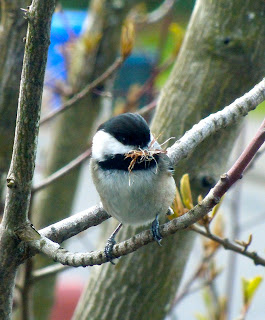 I watched them, five feet away, while I got ready to write a novel. When the chickadees were bringing in mattress material, I was rounding up research books, notes, and sources. When the chickadees were taking turns settin’, I sketched out my opening scenes. I wrote my first page, and the chickadees began blasting in and out of the house with bugs and grubs, indicating, to my fine detective mind, that it was really hungry in there. I tried hard to tell them apart. After a while I persuaded myself that one of them was a little sleeker than the other, though the difference was like shaving dimples off a golf ball.

Chickadee puppies should fledge and fly away about sixteen days from hatching. And this time I was going to see it, because I was spending so much time in that chair. Would they arrow through the canopy and stick their landings like mom and dad? Or blast out like plumb-bobs? Did I need to string up a net? 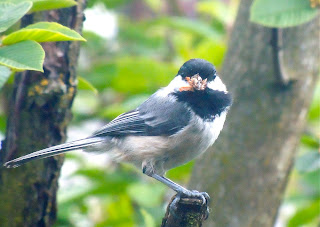 I wrote 4200 words, bringing me to a crucial early juncture. Scrub jays showed up at the suet feeder and the chickadees gave them what-for, pelting them with dee-dee-dees until, after five minutes or so, they fell bloated off the suet. I clicked on something on my screen and my 4200 words disappeared. The chickadees hurled in grubs, and I sent my neurons in after my lost novel. The hungry box began peeping like it was full of hamster secrets. I got back up to 6,000 words.

Now they’re fast and furious. The chickadees had a flappity-flap signaling system to prevent them from banging into each other at the entrance. You first. No, you. I got a purchase on my second scene and hammered my way toward 9,000 words. The peeping inside the box began to sharpen up, genuine dees without the chicka. I anticipated fledging day on Friday the 8th of June. But that day the grubs kept coming; one of the parents was now augmenting the menu with bug-and-suet sandwiches. By twilight my novel may as well have been rolling off God’s fax machine. I was up to 13,800 words, one for every grub that had been poked into that hole. And still no fledglings had come out.

I finished the first two major scenes in my novel and didn’t know exactly how to approach the next part. I sat down the next day and stared out the window. The chickadees were gone. I don’t know if they all flew out when I was farting around on Facebook or what. They were gone. And my screen was blank. And I thought the same exact thought you all are having right now: shit. I just wrote myself into an O. Henry story.

O. Henry made a mean candy bar but he was responsible for ruining fiction for me for decades. I loved his stuff when I was a kid. Everything I wrote was a clumsy imitation of him, with the boffo ending, everything turning on the last line, which was always strenuously ironic. The wife sells her hair to buy a fob for her dear husband’s prized watch. He sells his watch to buy a comb for her beautiful hair. Theirs was the best fucking Christmas ever, because they had love. Bite me. Or, the feeble woman convinces herself she would die when the last leaf falls from the vine. The artist paints his masterpiece, a leaf that never falls, and she thinks better of her dramatic demise and recovers, while he catches pneumonia from painting en plein very cold air and dies. When an O. Henry story ends, ain’t nobody confused about it. Bang the cymbals. It’s over.

That, I thought, was the way a short story should be. But modern short stories aren’t like that. They may turn on the last line, but it might be just a slight turn, more like a facial tic. I keep flipping the page, wondering where the rest of the story is. They peter out. That’s what they do. It would be like if I wrote a blog post and it just sort of, you know, whatever.

But this may not be the end of my story, or my novel. Chickadees sometimes get enough gumption to haul in a new mattress and start a second brood. That’s what I hear. So I’ve got my eyes peeled for Round Two. If one of my birds comes back with a glint in his eye and a furniture jones, I’m back in business.