Of Ducks And Dicks 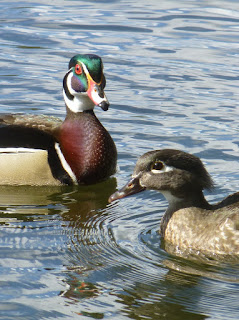 Dave and I took advantage of a wafer of sunny February weather and walked to the Rhododendron Garden. It’s a bit over six miles away. Twelve mile walks are no big deal for us; there’s a brewpub in this town every other block. And they’re really no big deal if you’re going to see a mandarin duck, which ordinarily requires a trip to Asia.

Nobody knows where this mandarin duck came from. They’re not subtle. The Rhododendron Garden is slathered in ducks, with an emphasis on wood ducks, which are stupendously gorgeous birds, unless they’re paddling next to a mandarin duck. No fair, the stupendously gorgeous male wood duck thinks, then. Might as well wear an old sweatshirt. The females of both species look a lot alike, and you gotta figure some of those female wood ducks couldn’t help but notice. You could at least make an effort, they’re thinking.

The species are a bit similar though and are related. But the mandarin duck doesn’t normally live here. People are so impressed with them that they get scooped up as pets, and sometimes those get loose. There are a few small populations in other places, notably England, where some of the looser ones did some raping and pillaging. Ducks are not nice birds, sexually. Ducks are among the few birds with penises and apparently being a dick about it comes with the package, as it were. 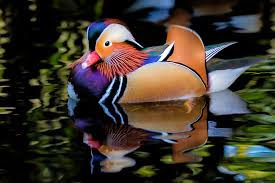 I guess this particular mandarin duck left in December. One does wonder where he went. If he were to show up at some random wet spot along the flyway, you’d think somebody would’ve noticed. This is why I think  he’s probably in Vegas with the show girls, blending in. Any time a rare bird is found, word gets out. We had a stray indigo bunting here at a refuge a few years back, just sitting in a tree bunting away, and the parking lot was stuffed with birders, because they don’t belong here. I’d just come back from West Virginia where you dang near had to scrape them off your binoculars to see anything else, so I was pretty serene about it, and set off in search of a bittern. 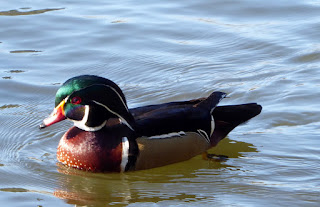 So if anyone is keeping track of the various perambulations of Dave and Murr, we have now walked twenty miles to not see a platypus at the zoo, and twelve miles to not see a mandarin duck at the Rhody Gardens, both of which feats could have been accomplished in a lot less time, with the same amount of beer.

Let’s review. The wood duck is as snappy a dresser as you can get outside of the tropics. Green helmet with white chin straps, pale sidewalls with racing stripes, bronze breast with stars. The mandarin duck has all that plus three colors on the helmet and a purple breast and full golden beard and a giant bustle off the butt you don’t ordinarily see outside of Project Runway. Presumably the bustle is made of a matched pair of overachieving individual feathers.

Look at that, the female wood duck says to her mate. If you’re just going to let yourself go, you could bring around a couple of snails now and then. To which her mate replies: He’s obviously compensating. And snails? I ain’t no chickadee. Screw you. And then he does, because he’s a dick.