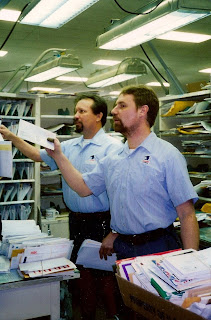 On a recent JetBlue flight, a flight attendant was treated rudely by a passenger, not, I suspect, for the first time, and as the plane taxied to the terminal, he grabbed the intercom and screamed obscenities into it, grabbed himself a beer, pulled the cord for the emergency chute and slid on out of there, and wouldn’t you love to have been on that flight? I don’t know what the passengers did, but I would clapped until my palm-prints were polished off.

It’s the whole thing. It’s the jerkwad passenger getting her what-for, it’s the tedium of airplane travel utterly relieved in one instant, it’s the brilliant means of exit. It is the rare soul who hasn’t dreamt of going out in a blaze of glory and saying what he really thinks when he couldn’t take one more day at work. But with an intercom? And a cushy bouncy sliding board? And a beer? Brilliant. 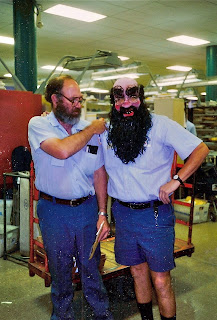 At the post office, even those of us who were not disgruntled had to be on the lookout for the ones who were likely to snap. The official post office line is that we don’t have any more people snapping than in any other workplace, which would be true if it weren’t false. We were all seriously nuts. Some arrived nuts on their first day and others had nuttiness thrust upon them. I don’t actually understand it, having always thought it was a rather pleasant and straightforward job, but there were an astonishing number of people around who were royally pissed off at everybody:  fellow workers, customers, and definitely the bosses. I believe most of those came pre-packaged with rage and continued to sharpen their own edges as time went on and it became clear that no one ever gets fired. It could be anything that sets them off. “These goddam letters,” they’d say, flinging them aside. Honey? Did you think we built space ships here? 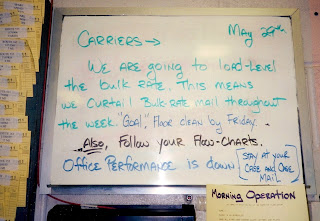 I was crossing the Steel Bridge one day on my bicycle when the horns went off indicating the span was going to be raised, and we should all wait behind the pair of closing gates. Another bicyclist got trapped between the gates–it was confusing–and the bridge tender, who had a microphone, bellowed at him. “Dumbass” was the nicest word that spewed out of his mouth for a full minute. Then he opened up the appropriate gate to let him back out, telling him to get the **** off his bridge and don’t ever come the **** back. It was loud. It was like the voice of God on the day His team lost the pennant. And I thought:  here this bridge tender had probably raged his way out of thirty jobs a year and finally found one where all he had to do was sit in a little box by himself and make the bridge go up and down, and he couldn’t manage it. He could have been a great letter carrier. 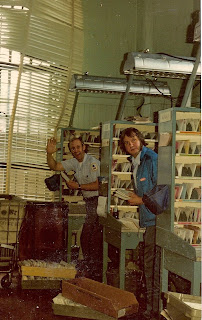 They might say otherwise, but there isn’t a mail carrier in America who hasn’t sketched out a plan for what he’s going to do when the shots ring out. There aren’t a lot of options. We all sort our mail into big metal cases with enough room underneath to crawl under and possibly hide; but that’s the area we keep tubs  of mail for people who are on vacation. One too many vacationing customers, and the whole scheme falls apart. And most people don’t take it well when we explain, as their official letter carrier, that they can’t go on vacation.

After the employee has flipped out and done what he could with his assortment of firearms, they always interview the survivors and his neighbors. A lot of times anyone could see it coming. But sometimes people say “I just don’t understand it. He was always such a quiet fellow, kept to  himself.”

Shit. You know how many of those people we have down there?