Oh Vanity, Where Is Thy Sting? 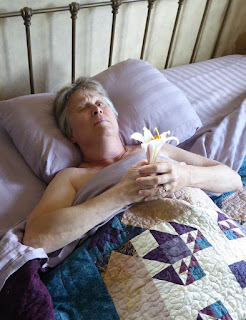 There are two doors to our downstairs toilet–possibly a design flaw–and if I don’t make a point of shutting them all the way, I can count on my cat Tater to bump open the first door with her nose, glance at me, execute a graceful arabesque, and then stroll out the second door, leaving me open to the breezes. Her motivations are selfless: she is giving me an opportunity to admire her.

Which is admirable in itself, inasmuch as a lot of folks believe she has let herself go. It’s emotionally healthy. I could learn from her. But I haven’t felt real admirable in a while, thanks to a brisk and efficient visit from menopause. What’s that, junior? Oh menopause is just a little heads-up. It’s the universe’s way of saying brace yourself, sugar bun, there’s a bunch of stuff coming up for you to worry about, but at least you don’t have to worry about being pretty anymore.


So I don’t waste a ton of time worrying about my looks, but it does occur to me on a nightly basis that I’m going to look like shit, dead. Assuming I’ll die in my sleep (in a way other people will refer to as “peaceful,” not knowing the terrifying content of my last dream), I have a pretty good idea what my survivors are going to see. Because as I drift in and out of sleep, I have become aware that my face and body, in their most relaxed state, assume an arrangement best described as “puddling up.” Sometimes when I roll over, I have to pick parts of myself up and rearrange them on the mattress so I don’t get a crease. It ain’t sexy.

“She looks so peaceful,” they’ll say. Then they’ll give in to curiosity and lean in, squinting.


“Yeah, that’s her lips. See? They’re sprawled out on the edge of her left cheek, there.”


“Man! I thought that was an old taco or something. What’re her lips doing so far away from the rest of her face?”


“Looking for the cool spot, maybe?”


“And shouldn’t there be breasts of some sort?”


“Sure. See [pointing]–that’s one right there, sort of wedged underneath the armpit. You can tell if you follow it out from the chest. The other one has to be around here somewhere too. Turn the light on.”


“Got it! It’s hanging off the edge of the mattress. We should put these back.”


“Sure. What’s all the rest of this stuff? All along the sides?”


“Huh. Now that we got the light on it, it looks like it’s just the rest of her skin. It done come unmoored, somehow. Like frosting that didn’t set up.”


“Right? Aww. She looks like a big flying squirrel.”


“A-dorable! Well, we should probably call the coroner or something, see if they can get this all scooped up.”


All right, y’all. First one on the scene, have fun, but I’d be much obliged if you could get me resheveled and spruced up proper for company. Take all the time you want. I’ll leave a couple spatulas and some duct tape and putty on the nightstand, and there’s beer in the fridge.