Oh What An Untangled Web 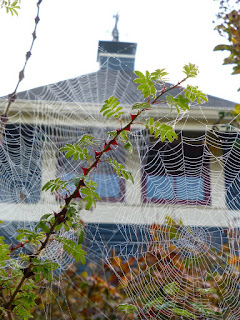 So there I was minding my own business when someone mentioned that orb-weaving spiders made up their webs fresh every day. Like everyone knows that. Like, it’s certainly the kind of thing a person who tries to pay attention would know. Especially if she were an attention-paying person whose father photographed spiders for fun and who has an actual degree in biology. “You mean they suck their whole web back up their butts and start over every day?” I asked, betraying myself.

“Pretty much,” came the answer. Well!

I had no idea. In retrospect, I think I know where I went wrong. I never wake up early enough to notice what my spiders are doing. Also? I can go weeks without making the bed. I’ve fixed skirt hems with Scotch tape. If I went to the trouble of crocheting something as magnificent as a web out of my own butt, I’d let it go as long as I could. Throw on a patch as needed, and call it a day.

But orb weavers are better citizens than me in that respect. It turns out to be true: spiderwebs have existed for more than a hundred million years, but most last only a day. The spiders do not suck them back up their butts: they eat them, and start fresh, usually in the evening. It’s probably a sensible thing to do, evolutionarily speaking, since they count on their webs for snagging the groceries, but who knows how it got started? Could be some of them just got peckish of an evening, and ate their webs, and then they were all dammit and they had to start over, and those are the ones who were most successful and got their genes passed down. Score one for gluttony. 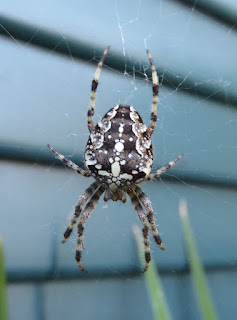 Speaking of gene-passing, male spiders are probably the most libidinous creatures on earth. They’d have to be, since they survive courtship only 20% of the time, and if they try for a twofer, they’re done for. The longer the male remains mounted, the deader he’s going to be. He might get away with a five-second job, but if he hangs on ten seconds, the female is going to eat him, and not in a good way. So that extra five seconds must really be something. It’s not too bad for the female either. Her suitor might use a special silk strand that vibrates in such a way as to entice her–that would totally work on me, too–and also he brings dinner. In the form of himself.

Almost all spiders have eight eyes, set up in various ways and pointing in various directions, which is helpful for keeping the kids in line, in those species that watch out for their kids. Most don’t, on account of being dead at the time, like Charlotte. You will recall that Charlotte’s kids all parachuted away from Wilbur the pig, except for three, and that is indeed what happens in many species. First thing an itty bitty baby spider does is stick its butt in the air, and if there’s any breeze at all, it tugs silk out of the spider. I imagine that feels kind of nice. And once the strand of silk is long enough, it takes off on the breeze and carries the spider away, because it is so very tiny and lightweight. It’s a nice start to life. 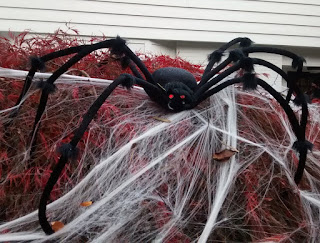 But other spiders do tend to the chilluns, like the wolf spider. The wolf spider will carry her egg sac around on her spinneret, holding her rear end up in the air so as not to drag it in the dust, and then when the eggs hatch, a thousand teeny tiny spiders climb up her legs and pile up on her abdomen, and it doesn’t creep her out at all, so don’t you complain.

Because I felt remorse over not having known about the daily web construction, I recently observed a spider right outside our window, and discovered all on my own that she achieves such perfection in her web by measuring it out with her own foot. She grabs a previous portion of the web with a foot while dabbing her butt on the radius to attach the strand, so it’s always exactly the same distance away. I discovered this my own self, although, as it turns out, this is not information new to science. I can’t help that.