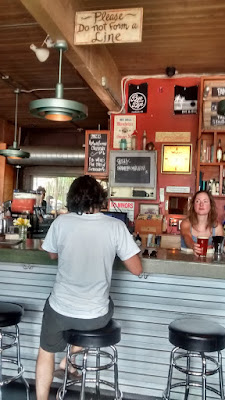 I’d seen the man before. Eighty, maybe; he’d figured out where the card catalog had been banished, off in a corner behind the Circulation Desk, but now the card catalog was altogether missing, and he was in line at the desk, seething. The nice woman escorted him over to the table and set him up in front of a computer monitor, and walked him through the basics, kindly, with one hand on his shoulder, and when she finally left, he poked away for a few minutes, with every keystroke bringing up new and ever more irrelevant screens he was helpless to dismiss, until finally he stood up as straight as he could and walked out of the library for good, carrying a little chunk of my heart.

Nobody likes to feel old, or stupid. Not even old stupid people like it.

I preferred the card catalog myself, but somehow I was able to loop a lasso over the new technology when it first arrived, and even though most of the time I’m flapping in the wind behind the technology as it races ahead, I’m still holding on. It was infuriating at first. The computer screen seemed like a big bright sign flashing “you’re dumb” over and over at me, but when I finally quit protesting and said “you’re ugly” back at it, things got easier.

It’s just that when you’ve lived a long time it seems like you should know more than other people. That’s supposed to be the deal. And instead you know less.

Doesn’t even have to be something as important as unlocking the key to the world’s knowledge. I can’t even unlock the key to my little portion of fossil fuel. Sometimes years go by without my having to pump my own gas, because it’s illegal here. And when I do, I want signage. There’s never signage. Do I put a card in? Or is this one of those places I have to go into the little chips ‘n’ pepperoni store and throw down a twenty before the pump even flickers on? I need a PIN, really? I need to see a guy in a little booth? What? Just put out a sign. I can follow instructions. How come everybody else knows what to do? And they do. So when their pump isn’t working, they know to move to a different pump, and not just sit there festering and assuming they’re the idiot. They’ve got confidence. They’ve got self-esteem.

But food should be easy. We went into a restaurant the other day, and, finding no sign saying otherwise, we wandered to a table, sat, and waited. And waited. Oh? Nobody comes by? Okay. We go to the bar and there’s a menu posted up high, and a bunch of stuff coming out of the kitchen. There are two bartenders. At some point we get aggressive enough to bark out a beer order, and then ask another customer how he got food. He pointed to a small knot of people bunched up at the bar. You order at the bar, he said. Right there? we said. Under the sign that says “Do Not Form A Line?” What do we do if there are people in front of us? Aspire to randomness?

“That’s just supposed to be ironic,” he said.

One sign in the whole damn establishment and it’s supposed to be ironic. How am I expected to know that? My new friend shrugs and glances around at a restaurant jammed with young, happy, eating people who all knew that, who were effortlessly surfing layers of meaning.

I’d stay, but it’s time to hitch up the buckboard and git on home. Pound grain. Slaughter the goose.