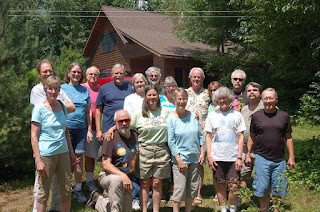 Attention! The fifth annual meeting of the Yorktown Youth Hostel Club is now in order, 45 years after the fourth. It’s an experiment. Take a couple dozen nerds who went on what was essentially an extended mass date in high school, scatter them across the map, wait a very long time, and then throw them into the same pot again and see what cooks. We all showed up with plenty of seasoning and some of our bits were crispy, but boy howdy if we don’t still make a tasty stew.

It was an outdoor club. No surprise our current lodging is festooned with vintage bicycles and canoes. We’re on a lake in the Adirondacks, laughing so hard we’ve humbled the loons. We’re all in our sixties, so we know that life spools out like a bolt of fabric, unrolling faster and faster as the bolt gets smaller. But it turns out you can pause for a moment and fold that fabric. You can line up 2015 with 1968, say, and that pleat will hold, at least for a little while. Then all you need to do is hold both ends and shake it to unload all the intervening years, the careers, the triumphs, the losses. For hours we stood and nattered like magpies on espresso, and continued over dinner on the deck, but the next day it was time to get moving. The Hostel Club is not a group of fanny-sitters. We decided to climb Crane Mountain.

We should have been ready for anything. We had an emergency room physician, and if he couldn’t handle anything that came up, we had a backup hospice nurse and, um, a coroner. We had an electrician and a poet and a real estate agent and a geologist and a psychologist and an occupational therapist and a marine biologist and a physicist and a mathematician, and figured we could cover any contingency shy of voting Republican (or, as it happens, working the microwave). So off we went.

Crane Mountain is a 3200-foot pile of boulders that the state of New York gets a civic kick out of calling a “foot trail.” There was the occasional trail marker, but we could navigate just as well by keeping an eye out for the fingernails of earlier hikers embedded in the rock. We had three stents and six heart bypasses among us, unevenly distributed, plus an assortment of herniated disks and grumpy joints, some hiking poles of which much was demanded, and an unreasonably sunny attitude. We were going to bag that

summit and collect all that scenery if it killed us, which was no longer just an expression. Maybe our short-term memory isn’t as good as it was, but we’re pretty sure the head counts at the beginning and end of the hike matched up.

In the ‘Sixties, we had fun and movement and laughter and all of it thrummed with an undercurrent of youthful hormones that most of us weren’t sure how to get into gear, and now we were having all of it without the hormones, I think. We’re not that much different. The former smart-asses are now merely smart. Teenage psychic pain has been replaced with the mature version: pain pain. But we’re cool with that. There might be pizza and ice cream tonight, and we have a whole week, and there’s probably more stuff to shake out of the fabric.