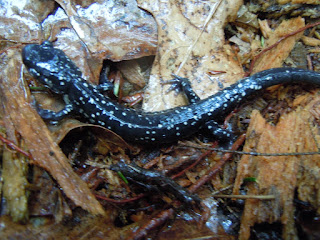 Thanks to my friend Linda, I know stuff about the olm, such as: there is such a thing as an olm. The olm is a long skinny white salamander that lives exclusively in central Europe. I am sure that is true, because if there were an American olm, it would have noodled its way to Linda’s vicinity and peeked out and waved a tiny little arm at her, and–and–she would have noticed it.

People send me information like this because I am a huge salamander fan. And as such, I welcome salamanders of every race and creed. That’s my official position, but just between you and me, my fondness is not evenly distributed. I’m shallow. When I say salamanders are the most attractive animals on the planet, I’m kind of referring to certain ones. I’m partial to the Plethodons. Even the estimable Ambystomas are a little ribby and fat-headed for my taste. But show me a nice flat-headed number with a big smile and big round eyes and little perfect fingers that cannot make a fist, and cue the swoon. 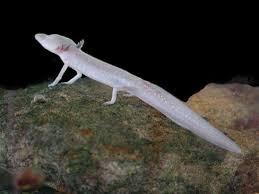 That does not describe the olm. First, there’s the matter of its color. White is not a color that really works that well on anybody. True, the olm lives in underground caves in nearly perfect darkness and no one can see him, so his casual attitude toward pigment isn’t much different than the fact that I wear pajamas when I’m not planning to leave the house. But the head is all wrong too. You want that smooth round face to hang a smile on. Not a tubular snout with a tiny pie-hole. And the eyes, being useless, have sunk below the skin where they lurk weirdly like eggs-over-easy. Still, we do have a salamander here. What do we know about it?

It lives in the regions of Herzegovina and Croatia where the salamander is well-regarded, being one of their only sources of vowels. The Slovenian word for it is moceril. It means “one that burrows into wetness,” and they assure us they mean the salamander. Then they wait for us to use it in a sentence and then they all crack up. Slovenians are assholes.

But not much is known about the olm, because unlike your clownfish and parrots and such, it lives in places no one wants to spend much time in. The locals used to believe they were baby dragons. Some report that the female olm lays upwards of 70 eggs, but only once every six or seven years. Others believe they can also give birth to live young. Yet others believe they spring from the head of the mighty Czklnkynt on St. Pczkwt’s Day.

Researchers claim the olm may live up to the freakishly specific age of 58, although others counter that they might reach 68 or even 100. Obviously no one paying attention has yet outlived one of the suckers, and somebody somewhere is receiving grant money to sit next to an aquarium with a notepad at the ready and observe an olm until it goes belly-up. I hope he has cable.

The males are smaller, but can also be distinguished from the females by their relatively larger cloacas during breeding season. In order to determine this a researcher would have to grab several olms to compare and flip them over and poke at their privates. This is the sort of thing ornithologists do to birds all the time, but that doesn’t make it polite. Research also indicates the olm, although blind, may be able to orient itself to the earth’s magnetic field. There wouldn’t be much call for this in a little underground cave of limited scope, but at least they know whether they’re coming or going.

They are subject to various environmental pressures now, but are surprisingly resilient. In lab experiments the olm has been shown to be able to remain alive for up to ten years without food. The main threats to the tiny olm are climate change, pollution, and olm researchers.