On The Edge Of Hall’s Hill 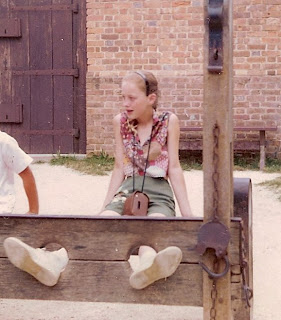 A while back, I opened the Sunday paper to find a little sidebar with the headline “this week in the Civil War.” It was startling. That’s the kind of news you get when you get into bed backwards and oversleep, I guess.

My first cup of coffee clarified that this was to be a retrospective series recapping the events of the Civil War 150 years ago. I’m really looking forward to it, because I don’t know much about it. I had no interest in history at all when I was a kid.

I knew what history was. It was a record of things that happened to white people. Other colors of people didn’t write anything down. They may have had better memories. Also, it was stuff that happened Before Murr. Most everything B.M. held no interest for me. There was a large war that had happened in the decade before I was born and it might as well have been the Crusades as far as I was concerned. The only time history was fun for me was when we could go to Williamsburg, Virginia, and stick my sister in leg stocks.

I recently began to be interested in American history because I was writing a novel that took place B.M. and felt the need to be more up-to-date on it, if it is possible to be up-to-date on history. The Civil War period baffled me. But I paid greater attention to the Ken Burns film when it was reprised. In the last fifteen minutes of the documentary I was surprised to hear that one of the generals had led his men up Hall’s Hill. I know Hall’s Hill! I had no idea it had historical cachet. Robert E. Lee I knew, because he had a famous highway named after him that I grew up a block away from. And Hall’s Hill was just around the corner, down Lee Highway. Hall’s Hill was where we kept all our colored folk in Arlington, Virginia in the fifties. Al’s Bar and Grill was at the top end where you could see it and there was never any reason to go down any of the other streets.

Northern Virginia is more cosmopolitan than the rest of Virginia: I don’t remember seeing any helpful signs on the drinking fountains to let you know what color water you were dealing with. Mostly we did without that sort of thing, because we had all the colored people bunched up in Hall’s Hill all neat and tidy, and all we had to do then was zone things around it. So there was a colored school, and there were the Regular schools, and that was that. You were assigned based on your address alone, and it worked out just fine without anybody having to spell anything out. Sometimes there were slip-ups. I do remember we couldn’t get into the Overlee swimming pool because our house was stuck like a scab on the edge of Hall’s Hill and we were zoned out. They didn’t want any black kids in the Overlee pool in case they made the water turn color, but that was silly–all the kids did that at one time or another. 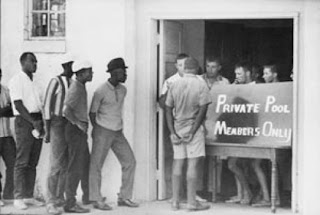 Anyway, I did some checking, and it turns out Hall’s Hill was the first place they established for freed slaves right at the end of the Civil War, and their descendants stayed put for a good hundred years. They didn’t start leaking out until just about the time I went away to college, and I haven’t been back. That’s not why, though.

It’s interesting both to learn and live through history. It affects us. For instance, I never really learned how to swim. I imagine other people suffered even greater consequences.