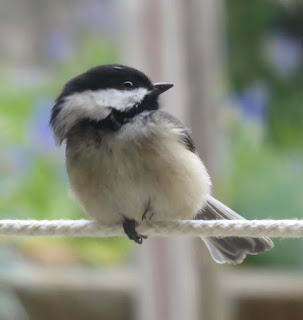 My pal Julie Zickefoose is a world-class noticer. One of the cool things you can do if you’re a world-class noticer like Julie is you can learn things that nobody else knows yet. It’s not like everything knowable is out there on the web somewhere already, ready to be rolled out on casters.

Ornithologists like to follow individual birds to see what they’re up to, where they’ve been, and where they think they’re going this time of night, Missy. They do this by nabbing them in nets and sewing little tags in their underwear. Sometimes they nab the same bird in subsequent years and eventually they know how old they are without having to saw into their tiny legs and count the rings. Or maybe someone else nabs them 10,000 miles away and we know how far they flapped for fruit, and then later know they came right back to the same original dang tree to nest. Cool stuff, although it’s a long shot you’re going to learn anything about any particular bird. It takes a lot of luck with your nabbing. 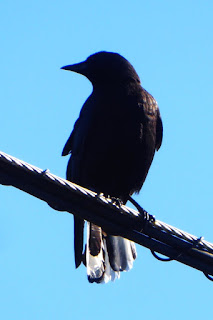 But Julie pays fierce attention to her own homies. Sometimes it’s easy for her to recognize them–a doe whose eyes are hooked up crooked, for instance, or a blue jay with missing feathers or a mustache. But she’s so good at paying attention that she doesn’t need anything that obvious. She can tell critters apart because of how they ack. One bluebird will distinguish himself from the flock by his tendency toward solipsism, for instance, which gives him–to Julie’s observant eye–an air of skepticism that sets him apart. She’ll not only know which cardinal winks, but whether it’s an affectionate or conspiratorial wink. Probably affectionate. She goes out on a limb for them, as it were.

Even I can do it if it’s easy enough. We have a crow a couple miles away with two white tail feathers and we’ve gone back for three years to check on him, and he’s always in the same tree. We think it’s right handy of him to be so recognizable. And I have also learned some things, by noticing, that are not in the books. For instance: robins fart. The literature says they don’t, but they do, and I’ve seen ’em do it. But mainly I can’t pick out individuals in a flock. Marge and Studley Windowson, my chickadees, to take an example, are i-stinkin’-dentical. They don’t even know who they are until an egg drops out of one of them.

UNTIL THIS YEAR! GREAT NEWS! I can tell Marge and Studley apart!

SHITTY NEWS! It’s because Studley’s got a bum foot! 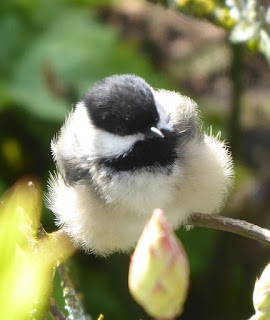 I saw him a few weeks ago and thought he was feeling po’ly. He was all flopped over and fluffed out on a twig the way birds get when they’re sick. But he flew off for sunflower seeds like anything, and ate, and flew up into tall trees, and generally acted fine. Later I saw him checking out our bird house and could see that one foot was all balled up in a little knob and he had to hang from the other one.  Marge was inside hammering away on her nest. We’ll trust The Literature that the female builds the nest, and that’s how I know Studley’s the one with the crumpled gam. And now I can really observe who does what for the next month and a half. I’m very excited. 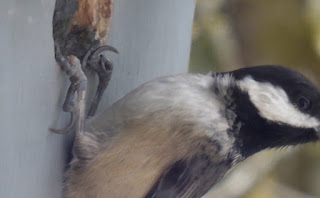 Last year I thought the neighbor cat Sid had gotten Marge or Studley because the nest had been abandoned, and Sid had been stalking them for a while. But maybe Sid only got hold of Studley’s foot. And that put him down for the count for last year’s brood, but he’s back in the pink now. Anyway, Sid is dead. He got run over by a car, which is really sad news for his personal human, but really good news for everyone else around here.