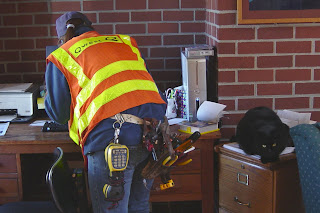 My computer started to sludge up a few days ago. I did the same thing I do with my other relationships: I pretended it was all in my imagination and everything would be fine the next day. It was sludgier the next day. I had a poke at downloading updates and subjecting my anti-virus program to disciplinary action, but the sludge remained. It took me a day and a half to get my rat photo sucked up into the blog, and it wasn’t that great a photo. I don’t like my own blog judging me. I shut the whole machine down and sent it to its room. Wait till your father gets home, I said. I was peeved.

One of the worst months of my life was spent dealing with an internet service provider when I couldn’t get any mail to go to or fro, which is really about all I was asking it to do. Every day off for a month I was on the phone to my new friends in India (Victoria and Alexander, I believe they said), who spent hours emptying my computer until it was cleaner than a colonoscopy patient. Then they filled it back up with jellybeans and joy and pronounced it healed, and hung up, and I tried to send an email, and I got the same error window (accompanied by an orchestral chord of doom that, to this day, will send me to my knees), and then I burst into tears. How I could be made so miserable with technology I had managed to live without for forty years? That’s when friend told me about a local ISP, Spiretech.com. They are so local I can see them without a passport–I mean, they’re right over there–and when I call them up, I get two ringy-dingies and then, bam, a human being comes on the line. And it’s usually a human being with a mass of monitors and such in front of him and a calm voice and the ability to see what’s inside my computer and possibly my very soul. Then we all get in the balloon and fly back to Kansas. No, they really exist.

So when my computer pouted and refrained from even sending email this morning, I called up my friends at SpireTech. Got Jaysen on the second ring. He never laughs at me except in the right places. He got to work right away and determined that I had 25,408 errors. That’s a lot even for me. Furthermore–he informed me with a gratifying tone of awe–I was dropping packets like crazy. Why, I was at a layer two packet loss. It was like I was picking up a packet and then dropping it right away, picking up another packet and dropping it, he explained. I thought I felt something. I used to have an old guy on my mail route who dropped packets in every way you can think of. His brain had thinned out alarmingly, for one thing; but also, when I gave him his mail, before I learned to put a rubber band on it, he would drop one letter, drop another in the act of picking it up, bend over and pick that one up, drop another, and so on and so forth, until he’d done a complete circle and was back at the mailboxes. Then he’d look for more mail. If he could have done th 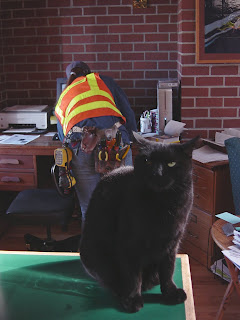 is starting at his apartment door, he’d have had an easier time finding his way home, which had gotten to be an issue.

“So this is bad, these 25,000 errors and the severe packet droppings?” I asked Jaysen. He said it wasn’t good. This actually made me feel better, that someone in a remote location was able to document that I was truly sludgy and not just whiny. He got my DSL provider, Qwest, on the line, and we had ourselves a jolly little three-way for a while, during which Jason advocated for me and even tried to spank the Qwest fellow right through the phone on my behalf, but the Qwest fellow was a friend of Victoria’s and Alexander’s and just as unflappable. I tried crawling under the table and messing with the wires with the cat on my back, and then I tried with the cat on my modem. I believe we left off with the solution that someone from the phone company was going to come out and knock squirrels off my lines, and then we’d see. The main point, as I see it, is it isn’t my fault.