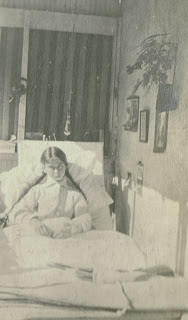 I have some very old photograph albums. My father stars in one of them as a toddler, and he was beginning to toddle in 1909. All of the action takes place in Bisbee, Arizona, where his family had moved because his mom had the consumption and it was thought that the dry air would be salutary. It wasn’t. In the rare photos of her, she is bedridden and wan, with the long-suffering aspect of a poet, which she was. She managed to eke out three children and a group of poems and then withered away. There are some surprises. Daddy is shown in a little cowboy outfit that looks just as fake as the ones kids wore fifty years later, and shoot–they probably had authentic cowboys moseying around then. Also, he had cocker spaniels and burros, and he only let me have a dang parakeet.

The album is made of two slabs of wood bound by leather straps; the pages are black and the tiny photos are glued in. Some familiar family critter that straddled the pet/livestock categories probably provided both the glue and the leather. Someone whose handwriting was as wretched as my dad’s made notations in white ink. You can hold his whole childhood in one hand.

Mom’s old albums are less rustic. The photos are neatly anchored in with fancy photo corners, and every one is captioned in her neat  hand, thanks to her having been taught the Palmer method of  handwriting. I was also taught the Palmer method but rejected it soon after for artsy fartsy embellishments like the squiggly E, and so now no one, including myself, can read my handwriting. Several photo albums reveal her to be a happy young woman with friends and some admirers (who IS that man with his arm around my mom!). She dutifully maintained albums when her kids came along. I arrived way past the time anyone was specifically interested in having another baby, and my own album covers my life up to age fourteen in about as many pages.

I got a decent camera in the ’70s and took a lot of pictures. You didn’t want to waste them, because film and processing could run into some money, but sometimes you’d come across something–copulating elks, say–and end up with thirty shots of the same copulating elks, each successive one taking up more and more of the frame as you crept ever closer. I’d buy an album and corners and select the last two elk shots and put them in. Not right away, of course. First I had to accumulate several years of pictures and then stack up some guilt about them and then put the best ones in the album, but the rest were stashed away somewhere in their little envelopes with the negatives for

perpetuity. You couldn’t throw away a photo or a negative any more than you could toss out a mystery key that you hadn’t used in twenty years. Some time around then they came up with the albums that had magic pages and you placed your pictures in them carefully and tried to smooth out the plastic sheet 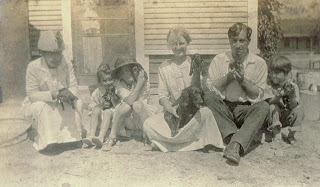 over them, and in a few years they had all turned orange and they either fell right out or they had welded themselves to the page.

The thing is, we tended to haul out the albums pretty often and have a look. And if I try to find a photo to scan now from those days, I’m pretty good at remembering if it was in the big red album or the smaller yellow one or any of a dozen others. Now I’ve gone digital and I don’t know where anything is. My life has never been better documented, but don’t ask me to prove it.