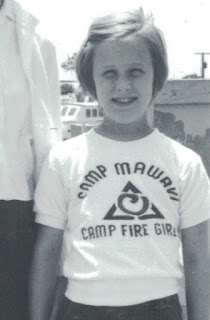 It was all about the patches.

Once you got to be a Camp Fire Girl, you got a vest, and then you could start accumulating these cool patches. I don’t know what they were for, because I never got that far. They could’ve been for anything. Conservation. Service. Congeniality. Typing. Showing up. Marshmallow cuisine. Patch-sewing. Patriarchy-fighting. I don’t know.

You had to be a Blue Bird before you could be a Camp Fire Girl, so I was. That got me an outfit, thus enlarging my school wardrobe by 50%, because I got to wear it to school one day a week. We had meetings. We had officers. I was Secretary. All I knew was Secretary was a thing I could be, because Mom had been one before I got invented. I was hoping it was a ceremonial title, but they made me take minutes and stuff.

Summer after fourth grade, we got to go to Camp Mawavi. I was plenty excited. Mom and Dad saw me off when we filed into school buses. I was in line with all my friends and when we got to the front of the line they asked us our ages, and all my friends said Nine and went in one bus, and I said Eight and they sent me to a different bus, like Auschwitz. It was horrible. I squeaked and pointed but I had no experience arguing with an adult, and quickly ran out of options. The buses pulled into camp and my friends went one direction and I never saw them again, and I went with the Little Kids in the Little Cabins, where they checked on us at night by shining flashlights in the window and telling us it was the fairies. The next day they doubled down on the fairy story to point out the fairy dust shining in the dirt, but my older sister was a rockhound and I knew it was mica flakes, and said so. It didn’t go over well.

I was miserable. We made lanyards out of gimp and potholders out of little loops. The worst was they kept trying to teach me to swim. All week I pretended I had a cold so they wouldn’t make me put my head underwater, but at the end we were supposed to demonstrate our ability to put our heads underwater by navigating an obstacle course in the lake. We were supposed to duck under the big floaty thing and come up the other side, and I must have looked mighty wretched, which is how you look when you’re only eight and contemplating your own death, because I remember the adult waiting and waiting and finally lifting up the floaty thing so I could go under it with my nose out of the water, and I passed. She must have realized she’d be stuck with my sorry fake-sneezy ass all summer if she didn’t.

After that my friends all Flew Up, right there at camp. That’s what it was called when you shed your Blue Bird wings and become a Camp Fire Girl and got the patches. If there’s anything I hated more than putting my head underwater, it was flowing up. Also, they eliminated our school so we all had to go to a different school for fifth grade. And guess the hell what? All my friends went to Tuckahoe and I went to Taylor Elementary and didn’t know anybody. That had to do with our house being in the Nearly Negro section of the county. We were red-lined out of a lot of things, including, not coincidentally, the public swimming pool. I went from being the most popular girl in Mrs. Rejuney’s fourth-grade class to being a real nobody with still only two outfits and no friends, and I got an attack of bashful that lasted for years. Never really quite pulled out of it until I got me a little social currency in the form of real titties. Once the dress code was abolished and you could wear hippie jeans and a hippie work shirt to school and still be cool, my remaining obstacles had been lifted. 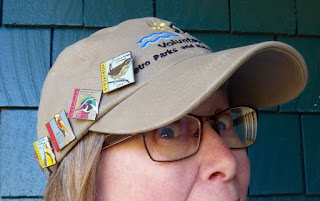 All of which is to note that I never got to earn patches for a vest. But now I have a hat. A Metro Volunteer Hat, earned for being a frog egg counter for the regional gummint, and I have five Birdathon pins to stick on it too. Shiny ones. Also, I can put my head underwater. I’d rather not, but I can.