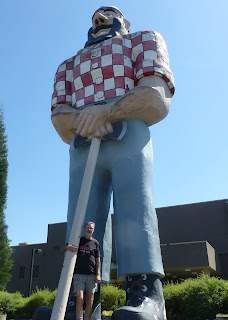 It happens all the time. I’m bopping along the sidewalk when I come upon some gigantic building that I could swear was not there a day earlier. In reality it had probably been three or four weeks since the last time I was on that street, but it doesn’t take long to put up a building these days. And there’s a lot of building going on.

It’s startling, though. It’s like walking into your kitchen in the morning and Paul Bunyan is sitting at the counter eating a plate of Eggs Benedict. He wipes his mouth and apologizes briefly for getting a grease spot on the ceiling and then tucks in again. “Where did you come from?” I’ll ask, and he’ll politely finish chewing while holding up a finger, swallow, and say “I live here.” Well then.

A lot of people are moving into Portland. There’s a rumor we still have water. And we’ve got pretty good planning here so there’s an urban growth boundary and an emphasis on infill. We don’t want to sprawl out into the countryside; we want to jam in together and live side by each like a basket of puppies. I approve of this in general, but in my neighborhood, it isn’t working that way. What’s happening is a little old house is bought, torn down, and replaced by a big new house. There might be even fewer people living in the new house than lived in the old. They pay way more taxes, but that’s about the only social benefit. 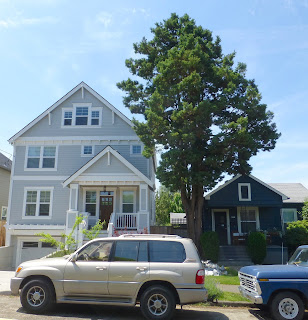 The thing that troubles me a little is I can never remember what the big house replaced. Even if I walked down that street once a week. Was  it the little blue house with the narrow porch and the tortoiseshell kitty? No, that’s one street over. Was it the white job with the red shutters and the Trans-Am out front? No?

The other day I was a little farther afield and came upon a four-story mixed-use retail and residential building that took up an entire block. There was a huge grocery store in the next block. Both brand-new. I was disoriented and confused. Where was I? I finally located the street signs and remembered it had been a vacant lot with a cyclone fence around it for, like, four years, and before that there was a donut shop there. Unless that was a few blocks down.

I was once researching the old D.C. jail for a novel, and found that although it took up at least a block in Washington, D.C., and was red brick, and had a rotunda, and was generally a remarkable edifice, historians were no longer sure exactly where it was. Even though it had only been torn down in the 1980s. No one could remember.


This is what happens to us. We think the world began when we were born, and we bury the past as fast as we can. People think whatever smattering of birds they see now is probably birds enough, with no notion that their parents grew up under a riot of wings and birdsong, and their great-grandparents saw the sky darken with a billion passenger pigeons. We don’t miss the passenger pigeons. We never saw one to miss. Joni Mitchell sang you don’t know what you’ve got till it’s gone, but it’s worse than that. Once it’s gone we forget all about it.

In a few years, children will grow up filing “rhinoceros” in a mental cabinet with “stegosaurus” and not feel any loss at all.