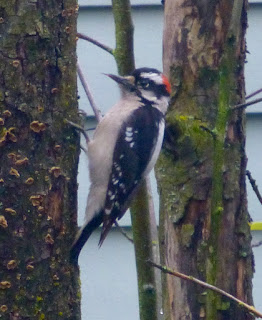 We get used to the sounds of construction around here. Not to mention destruction. You see a perfectly sweet little house on your walk and the next week it’s gone and the week after that it’s been replaced by a way bigger house with way richer people in it. A bunch of folks make a lot of money, the tax base shoots up, a few thousand more people huddle in tents on the freeway ramp, and everyone’s happy. That’s life in modern libertarian America, where there’s still plenty of dough, but it hasn’t all settled evenly.

The point is, it’s not unusual for me to hear a bunch of hammering. It is surprising when it’s happening on my house. Or, more accurately, Marge and Studley Windowsons’ rental, outside my window. They raise their chilluns in it most every spring, but it’s empty at the moment. That’s okay. For what we charge, it doesn’t really matter if it’s at full occupancy. At all. 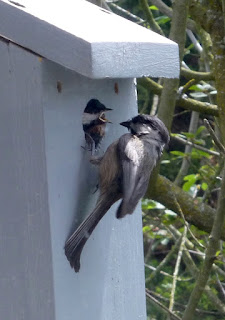 But I hadn’t seen any demolition notices and I was a little taken aback when the downy woodpecker showed up and started whacking away at the front door. This is a concern. According to the literature, chickadees are fussy about their door size. One and a quarter inches. One and a quarter inches. This woodpecker was definitely messing with the template.

And I wondered: do downy woodpeckers nest in boxes? If they can get their bodies in? It might seem to normal people that I know a lot about birds, but I don’t. I’m always picking it up on the fly, as it were. Turns out woodpeckers are fine with nesting boxes. But of course this isn’t the time of year they’re likely to be churning out fresh woodpeckers. I read on.

Roosting boxes! I didn’t even know that was a thing. This is one of those big important bird things I knew nothing about, but always wondered: what do they do when it’s really stormy and windy out? And where do they go at night?

It was particularly breezy yesterday and I watched a few birds on the tippy top branches of a tree that was rocking and rolling. It looked like it could be a lot of bouncy fun, really, although I suppose if you can also fly it might not be such a thrill. One thing I do know. They don’t have to clench their little feetses to stay on a branch. That would be dreadful, trying to get a decent night’s sleep while hanging on for dear life. What we call birds’ feet are just their toes. The part that you think is a knee is their ankle. Their knees are right up near the basic bird silhouette where it starts to get personal. If you can see their hips, you’ve done something rude.

And there’s a tendon that runs along their legs that holds their toes in grabby position. That’s the default. They have to operate the tendon to open their toes, so basically, they’re snap-on, snap-off accoutrements. They’re not likely to fall off a branch; they have to motivate to do that. The hummingbird, which spends every night in a stage of near-death, has even been observed to hang upside-down from a branch while sleeping. So you could set it swinging, if you wanted to. You’d kind of want to, but that would be rude also.

Still, how do they cope with extreme cold and wind and sleet and plagues of frogs? The answer for many is they roost. They get together with their pals and bunch up for warmth in a house or a hole. Some birds roost every night but some just hunker down when it’s icky. Our downy woodpecker might be trying to remodel the Windowson place for winter sleepage.

Apparently the chickadees might occasionally use the old homestead for that too. I’d hate to think of what they’d do if they bombed into the place and found it stuffed with woodpeckers. I’m all for letting Nature take its course but if I see Marge and Studley in a little tent by the freeway, I’m going to intervene.