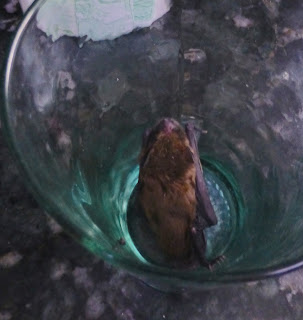 My friend Penny swears she didn’t shriek. She is basing this on her personal knowledge of herself, which includes the strong conviction that she is not a shrieking sort of person. She has known herself longer than I have known her, so I will concede the point. I will just state for the record that Penny emitted a brief squeak of very high pitch and decibel level that was completely out of context for the conversation we were having.

I no longer remember details of the conversation, but she was holding up her end of it when she decided to clean up a few dishes that had been left by her sink, and noticed a teabag in the bottom of a glass tumbler, and reached in to pull it out, and it was a little damp and a little squidgy but just a bit larger than your average teabag, and before she was able to fully process this observation, a wing unfolded on the teabag, which was revealed to be, in fact, a bat, and that’s when the thing that couldn’t have been a shriek happened. 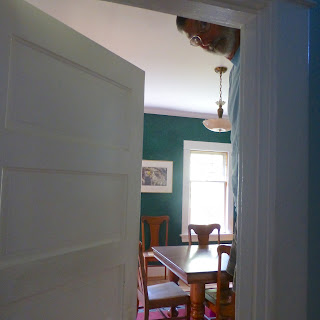 I don’t think she has anything to be ashamed of. If I had reached into the very same tumbler and pulled out the very same damp bat, there would have been an authentic shriek and an airborne glass tumbler and wild jerky moves on my part that might have disrupted the entire kitchen ecosystem. I am readily startled.

Dave enjoys this about me. At least once a day he sneaks up on me in some way that will cause me to shriek. He claims he is merely monitoring my heart health for me, but he is really doing it for his own entertainment. He can count on my reaction even though I’ve been on the lookout for Sudden Dave for years. At some point in every day I’m going to drop my guard, and there he’ll be. 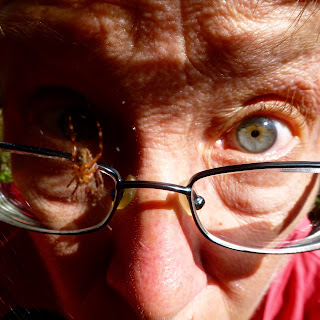 There are a number of critters that evoke this response in many people. I am not afraid of any of them. Snakes are splendid. Spiders are attractive and interesting. Bats are flat-out cool. What my sympathetic nervous system objects to is the sudden snake, the sudden spider, the sudden bat, and the sudden Dave. I want a little warning.

I’ll put my nose an inch away from a spider in an orb web to admire it. If a spider walks across my pillow–and it would have to be mere inches away from my face for me to see it without my glasses–I’ll jump a little, but still have the emotional wherewithal to calmly relocate it out the window. I could watch bats swooping in my vicinity all evening. But put that same bat in my bedroom when I’m not expecting it, and I’ll fill my shorts. Those little black spiders that run like the wind give me the willies. One day I stepped into the very center of a patch of baby snakes and they wriggled off in every direction. I thought the ground was boiling. Everything inside me–food, bones, organs, dreams of glory–liquefied at once. I don’t remember what happened after that, but I’m pretty sure there was some cleanup involved. 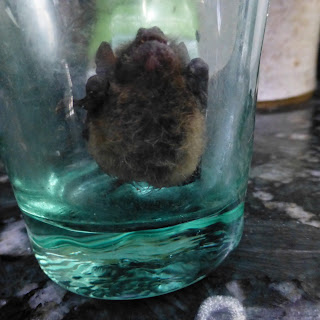 We’d decided Penny’s bat was dead. It was kind of head-first in the bottom of the glass, and it wasn’t moving, just unfolding a little. Penny also believes she didn’t shriek because she likes bats, as most of my favorite people do. Therefore a damp teabag bat could not possibly have startled her in any way. Whatever: I will report that she thereafter calmly relocated the bat–in the tumbler, but without putting a cover on it–outside on the ground, under a fern. A half hour later it was gone. We’re hoping for the best.