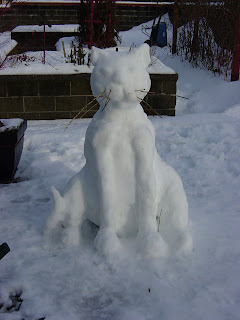 People like to say they’re dreaming of a white Christmas, but what they really mean is they would like a fluffy blanket of snow to appear overnight on Christmas eve after everyone has gotten to where they need to go–Grandmother’s house or wherever–and hang around just long enough to exhaust the kids, then vanish in time for them to motor to the mall for the sales. Because we just had us the whitest Christmas ever here in Portland, and you’ve never heard a whinier bunch. I was able to maintain my joy and composure owing to my innate childlike nature and sense of wonder, coupled with my recent retirement and smug detachment from the requirements of the workaday world.

So to celebrate, I tromped out to the back yard on Christmas day to make me a snowman. It’s never a snowMAN, of course. Usually some kind of critter. This time I thought I’d stick to the theme for once and opted to make a snow Santa Claus, complete with bowl full of jelly and slumpy hat (carved from snow: no accessorizing with fruit or fabric for me). I didn’t have a single seasonal decoration inside my house, save greenery ground into the carpet from my boots. So Santa it was. I got my balls rolling, as it were, and built up a nice fat five-foot tower, which was all I could manage at my height. And I began to develop his face. I tried for cheeks like roses and a nose like a cherry, but when I stood back and looked, a bear was looking back at me. Well, bears were fat too, and I had a good start, so I switched gears. Once the ears were established, I stood back once more, and discovered that it was more of a cat after all. I didn’t want to make a cat. But my own cat Tater had been holed out in the basement for two days in a state of horror over the dogs who were visiting, and her Christmas wasn’t going well at all, so it seemed appropriate to do her some sort of honor. I began to build a five-foot cat.

This might not seem like the most deliberate way of going about one’s art. Was Michelangelo aiming for another David when a crucial misstep with the chisel turned him into the Virgin Mary? My suspicion is that this sort of thing happens more often than you might think. Success is sometimes just a matter of remaining flexible, poised to snatch opportunity from the maw of failure. This is why so many of my culinary efforts gone awry get renamed (Chicken Surprise, Beans Vesuvius). This is even how something as nifty as a war can be got up. You might start out by proposing a war to avenge an unrelated terror attack, and when that doesn’t fly, you conjure up a dictator, then evildoers in general, and when people still balk, you remind them about threats to your daddy, and if that doesn’t get any traction, you suggest that poor old defenseless Christianity itself is under fire by dark, unattractively hairy men, and only when all else fails, you bring up the possibility of imminent nuclear annihilation, and by God it’s bombs-away. No different, fundamentally, from making a cat out of a Santa Claus.

So the cat was looking pretty good, overall, and I began to chunk the legs on, but by the time I had the tail attached and curled around to the front, it didn’t look quite right. Rather paunchy, in fact. I had momentarily forgotten the shape of a natural sitting kitty, and instead had created a fat tub of goo with its front legs bowed out and no proper hunchiness towards the back at all. Which is what I should have anticipated by starting out with a Santa Claus armature. But there wasn’t going to be enough time to make it right before dinner was served, and it didn’t look all that bad seen from the front. Maybe people won’t look too carefully. Maybe I can just hang a “Kitty Accomplished” sign over it, and hope people don’t notice that there’s not enough snow backing it up, not nearly enough.