It was my friend Lora who recommended the snowberry. “I just love mine,” she said. “The flowers are nice, and then you get these lovely pink berries. And it does great in the shade.” I bought a snowberry. I have a shady area I’d just as soon not take too elaborate care of. I’ve been ignoring it for years.

I do the gardening around here, and Dave does the cooking. That way nobody has to eat my cooking, and I get half the year off. I picked up a plant in a gallon pot: “Symphoricarpos, ‘Magic Berry.'” A magic berry! Whoa! “Small pink flowers are followed by clusters of attractive rosy berries that attract birds.” Birds! Little rosy balls! Who wouldn’t want little rosy balls? Nobody, I say, nobody! I tucked the plant behind a tall azalea and next to a clematis and continued my ignoring regimen.

This year I noticed a plant way over in another part of the garden that looked a lot like a snowberry. It 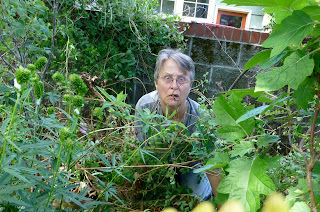 was odd. “I guess it re-seeded,” I thought to myself, not thinking quite so hard as to wonder how it could re-seed without having formed berries. Later I noticed the snowberry seemed to have gotten entangled in the clematis vine. I decided to hack my way in and see what I could do.

Too late. The snowberry had already given the clematis a wedgie and was fixing to take its lunch money. I began to snip at it until I could see where it was coming up. “Funny,” I thought. “I can’t believe I planted it this close to the clematis.” I began to tug at its roots. Suddenly I saw a movement in the bushes several yards away, and I froze, suspecting a marauding cat that needed to be encouraged out of the yard. I looked for a persuading pebble, but the movement had stopped. I pulled at the plant again, and once again leaves rippled yards away. In every direction. 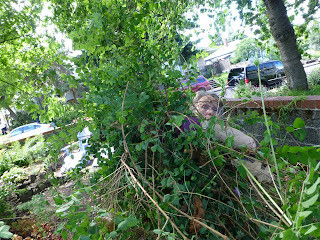 I followed one branch back to what turned out to be the original plant and tugged on that. Bushes began to vibrate all over the garden. This plant definitely had balls. The original tag gleamed from a twig. “Compact, spreading shrub. Grows five feet tall, spreading to thirteen feet wide by suckers.” And each sucker produces a whole new plant that also grows thirteen feet wide by suckers.

And I know just who the sucker was who spread it. Who doesn’t like rosy balls?

My friend Lora must be made to suffer for this. I think I’ll make her dinner.