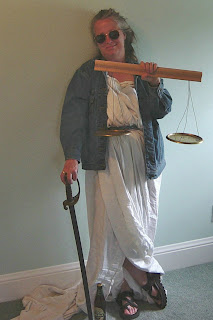 I’m sitting on the cusp of Libra and Virgo, which puts me at risk of an astrological wedgie. But really I’m a Libra through and through. I hold the balances; I see both sides of an issue. I don’t like to get pinned down. In spite of that, I just went in for my annual mammogram.

In the interest of my health, I have my annual mammogram every fifteen months or so. Fifteen-month years do wonders for your longevity. This time, after taking the required four pictures, they asked for a do-over. They said I moved. What moving? There’s no moving. If the fire alarm goes off, I’m screwed. Nothing pins a girl down like a mammogram.

The woman in charge (let’s call her Adolph) carefully stuffs your breast onto the bottom plate, hauling in a little extra from the belly, armpit and the lowermost of chins, and then takes the top plate and smashes you to a thickness that she can read through. The instructions are on the bottom plate. 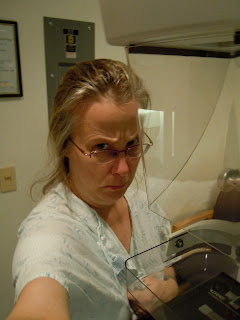 This used to be more painful, but as one obtains maturity, as here defined by a marked decrease in sexual attractiveness, one’s breasts begin to lose all their internal architecture, replacing it with a sort of apathetic goo. In the context of a mammogram, the procedure now involves less stuffing and cramming than merely peeling the tissue off the torso like a piecrust and rolling it out onto the plate. The top plate is now superfluous.

One year I got a letter afterwards suggesting I should come back in for a recheck. There was an “anomaly,” and a date available in two weeks. I’m not the sort of person who can survive two weeks in a state of panic, so I badgered them until they admitted they weren’t really doing anything just then, just sitting around eating pancakes and pita bread and playing with their food, and I raced in. The technician brought out my x-ray and hung it up on the wall for reference. 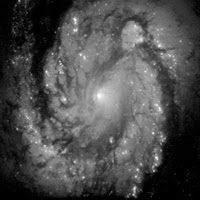 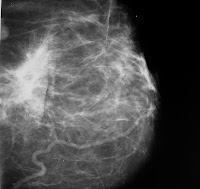 What these pictures used to look like, pre-menopause, with all the architecture intact, was something you might see from the Hubble telescope: millions of little stars and thready gases and nebulae, in which trained personnel can detect suspicious planets. I’d seen one of mine before. This one was deep space, all darkness, no nebulae at all, with the Star of Bethlehem blazing away right in the middle. I could see it from across the room. “Is that thing in the middle the anomaly we’re looking at?” I whimpered, visualizing a tiny tumor glowing in a manger. The technician nodded. She used a more focused x-ray machine and zeroed in on my supernova. Then she left the room with the x-ray to show the doctor,  leaving me with an inadequately distracting group of women’s magazines. At times like these, one is no longer interested in how to keep pounds off during the holidays, or five new recipes for fried chocolate.

Adolph isn’t allowed to tell you anything about your x-rays, even though you suspect she knows as much as the doctors do. She came back in and apologized that she needed to take a few more shots. Fifteen minutes later she came back and said she needed to escort me to stage two, Ultrasound. 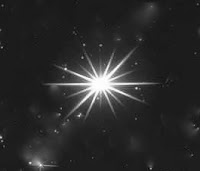 By the time we’d reached the Ultrasound room, I had run through a number of items that needed changing in my will, and while she was consulting the doctor about the new results, I’d begun a preliminary list of music I thought would be nice for my funeral. She returned to accompany me and my breasts to stage three, a stern interrogation. The doctor had my old x-ray, the one with the big star, hung up next to a series of new ones, which were entirely blank. “As you can see,” he said, using the pointer, “we can’t find the anomaly anymore. We probably got a little pleat in there the first time. You don’t seem to have anything in your breasts at all. You’re good to go.”

Nothing in them at all. I gave them an affectionate little pat, without taking my hands from my lap.