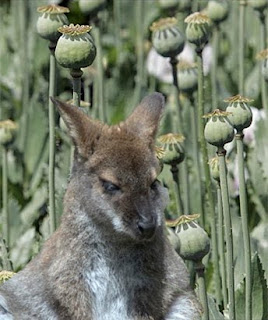 Crop circles crop up all over the world. They’re universal. What’s different about the crop circles in Tasmania is that they are generally acknowledged to be caused by stoned wallabies. Everywhere else, aliens get the nod.

They just practice good science in Tasmania, which is what you might expect from an island with actual devils. They don’t need to make stuff up. We got muskrats, they got Musky Rat Kangaroos. They also got Wombats, they got Chocolate Wattled Bats, the got Pademelons and they got Dorcopsises. We don’t even have Michael Jackson anymore.

The circles in Tasmania occur in poppy fields. Wallabies eat poppies, hop around in circles and pass out. That’s the working hypothesis, but there are problems. Many Tasmanian marsupials are nocturnal, which is after Science’s bedtime. Fortunately for Science, it requires only that a reasonable hypothesis be postulated in the daytime, preferably after coffee, and evidence gathered which would tend to support or disprove it. For instance, it has long been observed that sheep run around in circles when they’re high on opium (see “Hobson’s Ewephoria: Harmful Habit or Herding Breakthrough?”). If it can be demonstrated that wallabies tend to tilt and topple in a similar fashion, the hypothesis is supported.

But Science also demands consideration of competing contentions. Could a different animal perhaps be responsible for poppy trompling? Other likely marsupial candidates in the territory include the Long-Nosed Potoroo and the Eastern Barred Bandicoot. For potoroo and bandicoot alike, the hypothetical model put forth would predict a poppy-proximal profusion of munchies, primarily–in the case of the bandicoots–grubs, bugs and cockchafers. Many maintain that the mention of munchies has bolstered the bandicoot bandwagon, their beliefs being borne out by reports, in the Ringarooma region, of strewn-about chewed-upon cockchafer chunks (or their wrappers), though research remains inconclusive. 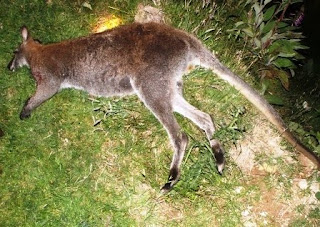 tted Potoroo Postulate point to the possible presence of poppies in potoroo poop, but scat is scarce and proof elusive. Gilbert’s Potoroo is even scarcer, and is seldom suggested as a source of circles due to its preference for truffles over poppies, and the possibility that it is still extinct.

It is further noted that debauchery rates among bandicoots–but for the oddball arboreal blowout–though largely unknown, haven’t grown, and are thought in the main to be waning and way below wallabies’.

In conclusion, few options obtain in the crumpling of crops, and our culprit may well be the wallaby. The preponderance of evidence, including the odd observation of wobbly wallabies, tends to corroborate the hopping wallaby poppy crop-drop hypothesis. Conjecture continues, but the key to the consensus among Tasmanian scientists is the sighting, in each circle’s center, of a single woozy wallaby. Science-wise, it’s considered a slam dunk.

Elsewhere, though, adherents of the alien invasion theory remain, as always, unabashed, espousing an easy and elegant extra-terrestrial explanation to account for a 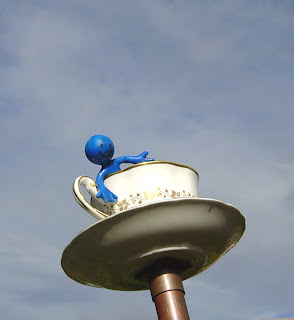 vailable evidence. An alien ship, they assert, might alight in the opium field, thus producing the circle as seen, and expelling one previously abducted woozy wallaby upon exiting.

With somewhat more vigor than rigor, the advocates of this argument advance a three-pronged analysis. Prong One: You can’t trust anything the Government says. Prong Two: the circles are so precise and of such geometric perfection that they must be the product of beings in possession of sophisticated technology, proving the source is alien, and hardly mammalian, and that would exclude frat boys as well as marsupials. Which is unassailably true, assuming that by “sophisticated technology” they are not referring to a stick and a piece of string.

Prong Three will be announced to coincide with the release of the T-shirt.

Scientists scoff. “Whenever I come upon a pile of potoroo poop,” says Tasmanian feces species specialist Albert Abawaggabagga, “I conclude it has come from a potoroo, and not a Crap Cloud.”