Plays Well With Others 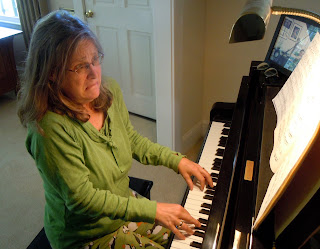 There are two kinds of people in the world: people who learned how to play piano, and people who are still mad at their mothers for not making them play piano when they were young, when they were mad at their mothers for trying to make them play the piano. Actually, there are more than two kinds of people in the world, if you include people who don’t like cheese, but for the purposes of this essay we can set that kind aside. No one understands them anyway.

It never occurs to the people who are mad at their mothers that there is nothing stopping them from taking up the piano now, because they’ve got a lot invested in being mad at their mothers, and that line of reasoning would interfere with their worldview. They’ve decided you either can play, or you can’t. And that works out really well for those of us who can. There aren’t as many of us, and unless we hang out with musicians, it’s likely that most of our friends can’t play piano, and it’s possible to start feeling sort of special about the whole thing. “Oh yes,” we say modestly, when pressed, “I play,” and your friends will pipe up and tell people you’re really good, and here’s the cool part: they don’t even have to have ever heard you play. In my case, they almost certainly haven’t. Like most people, I whack away at my instrument in private. But your friends go right ahead and hang a star next to your name and polish it up. After a while, you start to think it belongs there. 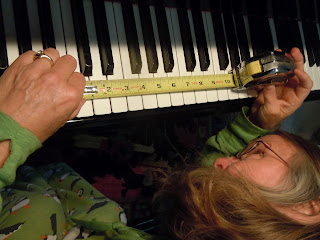 A real good way to get over yourself, in a situation like this, is to actually start hanging out with musicians. In Portland, at least, and probably everywhere, talented people are thick as cream cheese, and I finally got to meet a whole schmear of them by joining an informal performance group. Pianists predominate, but singers and string players and poets show up too. I got into it the same way everyone else did: I was shanghaied by Bill Lewis. Bill is a frighteningly enthusiastic man with no sense of personal boundaries, and thanks to that he has badgered a sizeable bunch of individuals, one by one, into showing up to perform something. You can tell him “no,” but Bill isn’t familiar with the concept, and if you show any sign of weakness, he will take the spatula of insistence, scrape you off the frying pan of trepidation, and flip you right into his group. And that is how, several years ago, I ended up quivering at a piano in public like a bunny in a coyote cafe. If bunnies could sweat.*

Anxiety. It’s bad stuff. Right away you realize you’ve left your talent in your other pants, and within a few measures you have decided that the keys on this piano aren’t the same distance apart as the keys on your piano. By page two you’re pretty sure that some of the keys are actually missing altogether and before long you’re swatting at the keyboard like it’s a drum set and feeling really sorry for your audience, because they are kind people.

I kept showing up anyway, and after a number of years, I had conquered my nerves enough that I didn’t leave anything on the bench that needed to be wiped up afterwards. And in that time I nurtured a throbbing admiration for chamber musicians, who are, by definition, people who can play well with others. If you’re the piany player in a string quartet, one of the things you have learned to do is keep playing, no matter what. 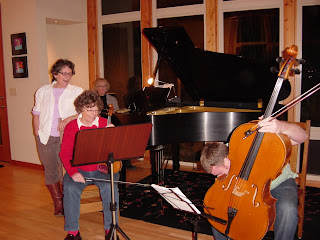 You do not get to oops you do not get to sorry you do not get to shit start over. No, this train is already on the move, and you have to fling your thigh up onto that boxcar and hang on until you can haul the rest of your ass up. You are there to collaborate on something wonderful and your whining option is off the table. It’s a good way to approach life, too: act as if it isn’t all about you, step out of your own way and keep going.

“You know, it’s just a matter of practice and technique. You could learn to play chamber music too,” my friend Carole says.

*I apologize for the density of metaphors. It kept getting away from me. If you wanted a tighter piece, you should have hired a professional.