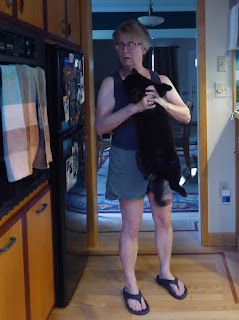 I had just picked up the cat–you start with the top end and just keep picking her up until, eventually, her feet leave the floor–and strolled into the kitchen, when something went bing! My first thought was that I must have had a thought. I’ve watched the cartoons and bing! is just the sort of sound that a thought makes when it goes off. Then I realized the only thought I had had was “Man, this cat weighs a thousand pounds,” and that didn’t seem profound enough to have produced a sound effect.

“What was that?” Dave asked.

Oh, you heard it too?  “I don’t know,” I said, and then noticed our oven was blinking. PF. Power Failure.

This was disconcerting. I understand power failures. They happen during winter wind storms. Trees are thrashing about, howling noises build up tension, and then all the lights go out. It’s mildly exciting, and we grope our way up to the tower to see if the whole neighborhood is out. The world is dark except for mosaic patches of lit-up blocks, which stand as a metaphor for life and luck and the futility of expecting justice in a dispassionate world. You get philosophical in the dark. 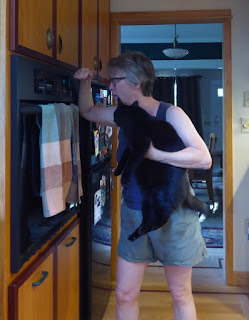 But this was weird. It was a sunny summer morning, nine a.m., and our oven was out. We checked the other clocks and they were out too. It was so sunny it was hard to tell if the lights worked, but they didn’t. I shoveled the cat under one arm and went to the computer, which was lit up. But then it made a baleful burbly sound. I shut it down.

Huh. Well, no big deal, I supposed–until I saw the coffee pot. It was plugged into the wall, so I didn’t have to worry about it getting away, but it wasn’t going to make me any coffee. This was serious.

The computer uttered a musical bleat. Somewhere in the next room, a laptop concurred.

A chirp from a smoke detector on the top floor was followed by a consensus of chirps. The doorbell put in an opinion. A portable intercom interjected a beep, and the second oven weighed in.


I was chilled. This felt uncomfortably like the technological equivalent of birds taking off in advance of an earthquake. What was going on? Were we in danger? Beep. Boop. Ping! BLAT.


I don’t trust my devices on the best of days. I resent their superior intelligence. Clearly they knew what was going on, and I did not. They were communicating with each other. It was ominous. It smacked of…collusion. Oh shit! Of course!

I needed to think. First things first. If I were going to get to the bottom of this, I’d need coffee. I decanted the cat and walked around the corner to the coffee shop. They hadn’t lost power at all. I got a latte and walked back home. Where everything was up and running again. Full power. Lights and everything. Like nothing had ever happened. How silly of me! The Russians aren’t in a position to turn off my coffee-maker.