A Precipitation Of Swifts 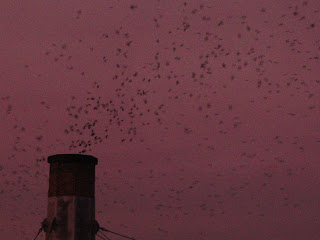 The Chapman Elementary School in NW Portland is the site of the largest gathering of Vaux’s Swifts in the country. They come from miles around to congregate for a few hours in the vicinity of their dormitory, the large chimney stack of the school. At some point they will begin to drop into the chimney in a large, whirling vortex, and there they will cling all night, side by each, all thirty thousand of them, until it’s time to fly out again in the morning. For much of the month of September, Chapman can lay claim to having the softest chimney in America.

That’s pretty much it for the swifts; they fly, they eat bugs, and they cling. They don’t have the right kind of feet for perching in trees, so they have to be good at flying, and they are, reaching speeds of up to a hund 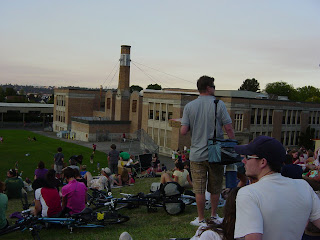 red miles per hour, which is why they aren’t called Vaux’s Pokeys. When you lie on your back and gaze up at a swirl of swifts, they shoot into the distance and vanish utterly, only to reappear elsewhere in the sky. You can go ahead and claim to be attending one of the wonders of nature, but it’s like looking at your own eyeball floaters. Their numbers accumulate with the dusk, swooping in drifts towards the chimney and back up again, until some sort of signal prompts the first one to drop inside–probably the one closest when the music stops–and the feathered cyclone begins. Until then, they’re all arranging themselves into their proper cliques, like schoolchildren milling about outside the cafeteria, loathe to be stuck at the dork table when the doors open up. Also, if they’re an ordered society, which it appears they are, they are all getting their last poops out before bedtime. It’s only polite.

There is a third species involved in the festivities, the Cooper’s Hawks, and they can perch just fine. They dot the tall trees down the way, shooting the breeze and scratching themselves, until one of them gets the idea, hey–what say we pop down to Chapman and get a little take-out? And so, one at a time, they do, setting up on the rim of the chimney and craning their heads around, waiting, timing, and then they pop straight up and nab a swift and go home to watch the game with the boys. The humans down below put their fried chicken down long enough to boo lustily, but I’m more tolerant. I like what I hear about Cooper’s Hawks. Male Coopers pitch woo to their conspicuously larger womenfolk for up to a month before scoring, and they do it by bringing them food. That works on me, too. So I can live with the idea that when the swifts, all thirty thousand of them, do roll call later in the evening, they’re going to come up three short.