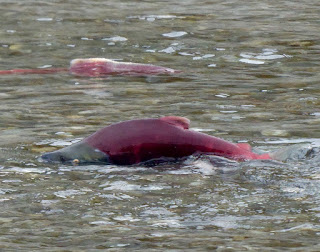 It was like being a chaperone at the junior prom.

K.C. and Scott let us get our breath after Denali, served us some delicious chunks off her 286-pound halibut (what the hell, Alaska?), and then walked us a mile or so into the woods near their house. Where, instead of terminating at what would have been a perfectly acceptable mushroom or salamander, we stood on the banks of a wide, graveled, braided river and watched sockeye salmon churn upriver in ardent anticipation. Thousands. Thousands of cherry-colored fish on their way to a very important date. 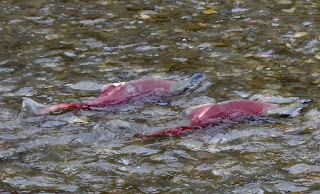 Cherry-colored. Why? They start out blue and white like any sensible ocean-going fish, but then, as the urge strikes, they turn bright red and their heads turn green and the males get long in the nose and develop a hump; make of that what you will. Why green heads? Because nothing goes better with red. It is possible there is a more involved explanation than that but beauty has its purpose.

The involved explanations would also have you believe that redness indicates fitness and salmon choose each other on that basis, as though they’re conducting a job interview, but what else is beauty? You might as well say they choose the beauty. After all, we do too. Sockeye salmon, like other salmon, get the pigments in their flesh from what they eat, primarily nice pink krill and the like. That’s also why tomatoes, and your better flamingos, aren’t white. Carotenoids. You spend a few years in the ocean eating what nature intended and you’re going to look really appealing on the plate, not that that’s much of an evolutionary driver. 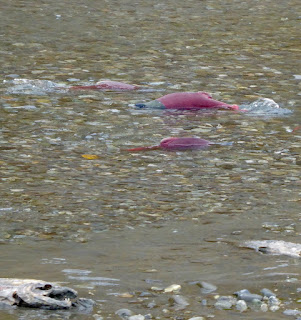 So when things feel just right, and hormones start acting up, and you’re a sockeye, you turn red and green and humpy. Trust me, there is nothing weird you can’t blame on hormones. You turn red because those terrific pigments you hoisted from your dinner start to move toward the skin under your scales, and your scales are transparent.

I’ve wondered about the nature of the salmon’s motivation to spawn before. Sure, we fling around phrases like “biological imperative” and we know that whatever scoots them along gets rewarded in progeny. But still. It’s not like anyone sticks anything in anyone else. Or even, really, touches. It’s hard to imagine the draw. Until you remember new love. 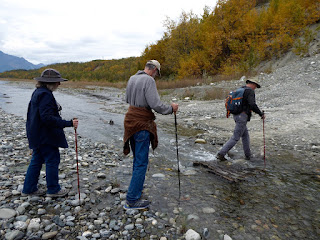 And no one has much of an explanation for that. Someone catches your notice and sparks your flesh, and there’s a quake within you, and you are drawn inexorably to that person, pulled right across the room to that person, and nothing is more important than closing the physical gap between you, and who can reason that out? Is there any point in trying? You are in such thrall you will offer up the secrets of your heart. You will vibrate the silky web. You will show your reddest meat.

The biggest, reddest males have the most success at this business, and get to swim next to their beloved and shoot sperm over her dropped eggs, but sometimes the lesser males get a squirt in too, later, after everyone’s gone. Just like at the prom.

We’re standing by the punchbowl watching the feints and fumbles and surges and urges. Love and beauty, that’s what we’re watching.