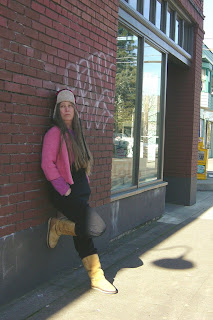 Phone rings. It’s my neighbor Beth, who always gets right to the point. “What should I wear to a prostitution-alternatives fundraiser?” she queried without preamble. Well. There are so many ways one could go with that. Will there be authentic prostitutes there, with whom one could show some kind of sartorial solidarity? Or will the emphasis be on “alternatives,” so that one should model something appropriate to other lines of work? Maybe a waitress outfit, for instance, although many of these blur the line.

I’ve never bought into the notion that you are what you wear, believing only, at a maximum, that you are underneath what you wear. Most of the time these days it would take a lot of digging to locate me underneath my clothing. I’m somewhat thick, and my clothing is even thicker. Once the layers get thick enough, most people lose interest in even trying to figure out what’s underneath. Pop a post-menopausal face on top of it all, and the chances of being molested, even in a friendly way, drop quite a bit. When I was a teenager, though, I had a tendency to go in the other direction, clothes-wise. I was horrified whenever I discovered that men who came right up to me on the street, total strangers, had come to a different conclusion about my wardrobe than I had intended. Like every other sluttily-dressed teenager in the late Sixties, I believed I was expressing freedom and a healthy lack of inhibition and joy in life. I was misinterpreted on a daily basis and it never failed to make me mad. How dare those men infer I had something to sell! (It was free.)

Beth is actually in the prostitution-alternatives biz, having recently gotten a grant from the city to handle transition and mental-health services for prostitutes looking for a way out. Knowing this came in handy when I decided to dig her car out of the snow the other day as a favor. I found no fewer than five similar maroon sedans on the street and partially excavated four of them, looking for clues, before I scraped her window clean, peered into the passenger seat, and spied a sheaf of papers with PROSTITUTION emblazoned across the top. Bingo! That’s our girl! Start shoveling.

The fundraiser was interested in cash contributions, of course, but also on the lookout for feminine hygiene products and warm coats. I no longer need either of those two things, and for the same reason. And any prostitute who wore any of my discarded clothing would find her clientele dwindling, as it were, before her eyes. As for Beth, I think we decided that black velvet pants and a sensible T-shirt struck the right chord. A discreet thong for solidarity would be fine, but no need to go all Lewinsky about it.