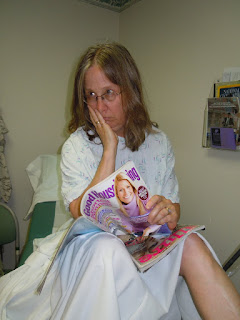 You know that feeling when you’ve sat down on a toilet seat and there was a little drop of something on it but you don’t realize it until you stand up again and there’s that little cool spot on your butt that you hope is water? Hold that thought.

I’m at the age where people complain they were never warned about this or that health issue. Actually, I’m way past that age, because a lot of it happens during menopause. Or perimenopause. In fact perimenopause is one of the things that people say no one told them about.

So in case no one told you about it, perimenopause refers to the years right before authentic menopause in which your body is just experimenting with how it would be if all your youth-enhancing hormones disappeared. So one day they’ll drain out and the next week they’ll surge back and be all What do you think about me now and you won’t know whether to laugh, cry, or stab someone just because. “Nobody told me my periods would get heavier and more frequent,” people complain, nor do they mention that from time to time you will be passing something that looks like a small damp rodent, or that you will develop new moles everywhere, and then plant whiskers on them like flags, or that you will be asked to cut down on sleeping for a few years because you can sleep when you’re dead which by the way is coming right up too.

That business about being all crabby because your hormones are in flux is something people do tell you about, but it’s not true. You’re crabby because you’re just about at the age when it will become obvious you married the wrong person or wasted thirty years at the wrong job, or had more kids than you needed or will ever use, or you realized you didn’t follow your dreams because you never had any to begin with even though everyone assumed you should.

They don’t always tell you about pre-perimenopause, which would be the thirty years before perimenopause. If you’re lucky someone will have warned your nine-year-old self about periods but even so that first one is still going to come as a big surprise, and like as not people will have glossed over some of the nastier details in favor of something more hopeful like “You’re becoming a woman.” So even with the basics, you can’t always count on a ton of good information. 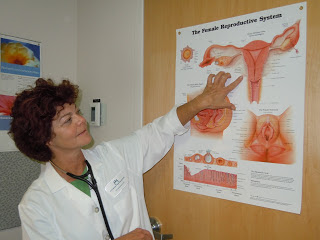 And as long as we’re about it, they don’t tell you about how unpredictable your periods are going to be, especially the whiz-bang very last one that happens two years after the one before and one year after you’ve gotten rid of all the paraphernalia, as soon as your last hormone can detect you’re wearing white pants.

They don’t tell you anything about fibroid tumors and when they do, it’s because you already have them, and then they tell you they’re usually benign, although not always. They don’t mention that they like to sit on your bladder like a big fibroid joke.

They don’t mention the connection between laughter and laundry.

There’s stuff men don’t get warned about either. Like peni-pendular recession, or the effect of scrotal gravity on the hairline. Nobody ever talks about that, but those bow-legged old men with gigantic foreheads didn’t come out of nowhere.

And so as a public service I offer all of these observations to those who might otherwise complain that no one ever told them about them, and add the following:

Sometimes your body gets just a big kick out of itself and makes shit up. Like suddenly developing a dime-sized portion of your left buttock that feels just a little colder than the surrounding acreage and every time you pull your pants up you think: did I just sit on a wet spot on the toilet? Five times a day you think that, for a couple weeks, and then you realize your own buttock is doing  that to you for no reason medical science will ever discover. There won’t be a name for it, or a ribbon-color for it, or a foundation devoted to its cure.

So don’t let that come as a surprise.