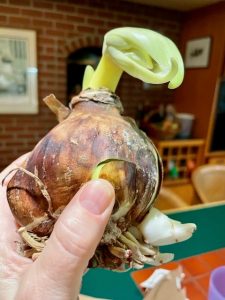 Last winter I was given an amaryllis bulb. It was a kit. Bulb, pot, soil-puck. The soil-puck duly fluffed up and I plunked the bulb into it and damned if the thing didn’t grow into its full glory with hardly any encouragement and no expertise on my part at all. Usually, indoor plants trudge into this house in a state of bleak resignation like Marie Antoinette on the way to the Guillotine.

So this was quite the success. But eventually the amaryllis faded and turned brown and slowly withered away. I left the pot on the windowsill until all the leaves disappeared and then I left it there some more. Probably there was something I should have done with it so it would bloom again this winter. Put it in the basement in a paper bag or something. I could look it up. What I did instead was nothing. It became one more of the Things I Should Get Around To. It’s got a lot of company around here. This whole house is full of reproach. It might as well be built on stacks of unread New Yorkers.

So the other day when I was busy ignoring something else I should get around to doing, I noticed the neglected pot on the windowsill again, with its layer of lint and spider poop, and just for the sheer hell of it, I tossed in a few tablespoons of water. First water that sucker had seen since February. It was either that or I’d have to look up amaryllis bulb care on the internet retroactively, and maybe the kids know how to do that, but I don’t. Probably I was supposed to unplug it and plug it back in. 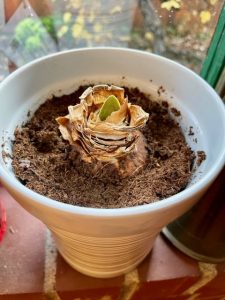 The next day the smug little bastard shot out of the soil with a ping of self-importance. Stuck its little green tongue out at me. It was a botanical nanner-nanner.

If that don’t beat all.

There’s such an urge to life. What seed lies dormant in the hearts of the seventeen-year-cicada nymphs such that the whole gang tunnels up to the surface in unison? How do they all sit in the dark to think about things for seventeen years and then come to the exact same conclusion?

There are seeds that lie in wait in the desert for a hundred years and then blast into extravagant life with the first dab of rain. There’s singing, there’s dancing, there’s (shhh) pollinating, and a few minutes later there are new seeds ready to roll around for another century, paragons of patience.

Could this please be a metaphor? We’re all circling the drain pretty hard now and it’s hard to hold out hope. Mother Nature set us up as a Make-Your-Own-Asteroid species, and she’s obliged only to take care of herself, not us. She is unmoved by our existential dread. It would be lovely to think we might rise again, with wisdom this time. It would be lovely. But we aren’t owed that. We’ve got the urge for life but our seed is made of guilt and regret and nobody is under any obligation to relieve us of it.

I don’t think we’re going to rise again. But maybe we can be the soil puck.