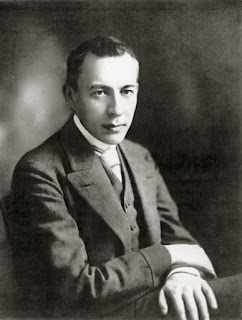 Sergei Rachmaninoff was a big old romantic Russian composer and virtuoso with a flawless memory who could comfortably reach a twelfth on the piano, or palm a medicine-ball, which is deeply unfair. I mean, anyone could play as well as he could if they had freaky fingers, monumental talent, and practiced all day long for fifty years. I’ve been playing a piece of his recently. It’s called Elegie, so it’s about death. It’s maudlin as hell, but it works. Rachmaninoff carefully attached his opening notes to our heartstrings and then yanked on them all the way through. A lot of people never even hear the ending because their heads are in the oven. It’s sad, is what I’m saying. No one mourns more extravagantly than a Russian.

Russians are very interested in death. In fact, there’s a big argument now about where Sergei Rachmaninoff himself should be decomposing. He is currently interred in Valhalla, which is just outside New York City, but there are those who believe he should be rotting in the homeland instead. They’re willing to hoist him up and make it happen, too.

The Russian Culture Minister, Vladimir Medinsky, stated with confidence that Rachmaninoff had dreamed of being buried in Russia, although there’s no way of knowing if that was one of his good dreams. And it is true that the composer missed his home country terribly, but if he’d wanted to be buried in Russia he could have just hung around in 1917 and let the Bolsheviks do him in. Then it would just have been a matter of digging him up and relocating him when and if he became fashionable again.

That’s what happened to the Romanovs. They weren’t even all that reliably dead for a while, and mostly unaccounted for, but eventually a lot of their bits were rounded up and given a proper burial. Basically, any dead Russian of prominence can expect to be periodically exhumed and relocated according to the whim of whoever is currently in charge of writing history. If you’re a valuable Russian commodity of the 20th century, at a minimum, you can expect to trot the globe for a while, and then try to grab a spot six feet under and hold on, but there will be no guarantees.

I’m not 100% sure it ever makes sense to be proud of where you came from. It’s not as though it’s an accomplishment. Still, Russians can justify their allegiance as much as anybody. Theirs is a rich and storied culture. They don’t write little novels. They don’t compose little pieces. They might have been exiled in life, but that doesn’t mean they’ll stay that way.

As formerly living valuable Russians, they must be ready to continue to serve the state, but the state wants to curate their corpses: they don’t want just anybody. The Siberian tundra is spackled with deceased citizens of strong character who didn’t start out there, and those are likely to stay put. But there is a strong conviction that any retrievable portions of approved illustrious dead Russians should be gathered up and bronzed, stuck in a glass box, refabricated as nipple jewelry for the President, shoved underground again for the greater glory of the motherland, or pulverized and shot out over Ukraine to inspire the troops. Resting in peace is for sissies. Westerners.

As an American, I have the leisure to expect my own carcass to stay put, but I don’t care. I do not give one hoot about where my remains end up. I certainly do not believe I should be carried back to Old Virginny, the place where I was born. If anyone asks, my preference  would be to be recycled as vulture poop, and the vulture can drop her load anywhere she wants.