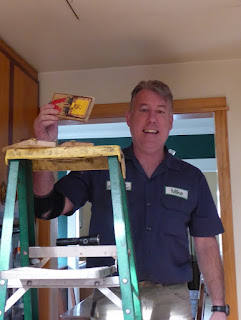 What could be worse than a bunch of rats running around in the house, I thought? Didn’t take long to find out.

A rat no longer running around in the house.

A rat three days past running around anywhere.


In the cold air return. Way, way in.

When we have company staying over.

Not the kind of company where it’s all the same to you if they suddenly discover they need to rush home for their dog’s spa treatment. The nice kind. The sweet kind of people that speak gently with their sweaters bunched up past their noses and say it’s hardly noticeable.

This is the sort of thing that makes an adult out of you in a hurry. The duct system in the house hasn’t been cleaned since it was installed, twenty years ago. So it’s probably time to schedule that. And mention the rodent, in case they can do something about it.

And maybe it’s time to tackle the little holes up on the roofline where the Rat Guy said the rats were getting in. Even though you’re pretty sure they’re getting in other ways too. And replace the siding on that steep dormer wall that you put off replacing ten years ago. 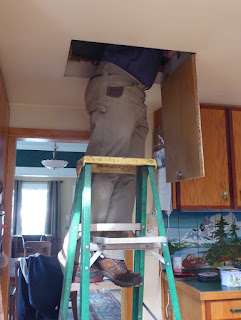 So I went on Yelp and within an hour I had a licensed contractor who could clean the ducts and come out the next morning at nine, plus another one who could replace the siding and thwart the rats at eight. That seemed auspicious in itself. The first worked at a flat fee, and the second worked by the hour plus materials. Neither was in the slave class that most of us would prefer to employ. You know. The independent operator who’d prefer to be paid in cash, thank you, and works real hard and does a nice job and doesn’t contribute to Social Security or public education or the war effort or anything. Nothing against those guys, but I’m a union girl and a bit of a socialist. So.

The siding guys came out and the clock began ticking. Beyond materials there would also be a charge for the dumpster, and instead of it taking a half day as I had imagined, they were looking at three. The duct guys came out and stuck their entire heads in the cold air return, emerging with their hair falling out in clumps and in full agreement that there was an ex-rodent in there. They couldn’t promise they’d get him, but sometimes they did get something sucked up in the vacuum. That was okay. I’d read up, and knew to expect that. I wouldn’t have stuck my personal head in that vent for twice what they were charging.

You know how fun it is to drop a little money on something really nice and new and pretty? A piece of art, a new sofa? This isn’t like that.

They’re hammering on the outside of the house, and inside a vacuum is set up, right next to the imaginary stack of $100 bills flipping over one by one and disappearing down the vent.

The duct guys left and wished me the best of luck. They hoped they’d gotten the little bugger.

They didn’t. I think they did stir him up a little, though. In a week or so it will turn into a harmless cracker.