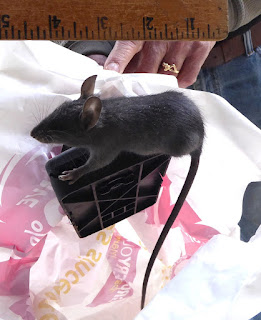 Smack me if I ever complain about ants again.

Coming up on forty springs we’ve lived in this house and none of the relevant gods has seen fit to drop rats on us, until now. We had a bit of a mouse thing going on in the early years. Taking care of that looked like it would involve cleaning up after ourselves in the kitchen, which might have interfered with our drinking. Then we became tidy people. We threw out the stove which had gone mouse-condo and got new appliances. Mice showed up just often enough to entertain the cat. She stalked the dishwasher and came up with a genuine rodent about once a year. Cute little guys. They say if you see one mouse, you have five thousand. I couldn’t prove it. Seems more like we just get the one.

They say the same thing about rats. I hadn’t seen any in the house. However, judging by whatever is thundering across the attic above the kitchen, and given that no one else in town has reported a capybara infestation, I’m entertaining the possibility that we have lots and lots of rats, or possibly small bison. We called pest control.

This is the kind of problem you take care of yourself when you’re young, but now we’re more inclined to pitch money at it. Especially when our Tyvek suits are at the cleaners.

Nice outfit. They don’t use poison, which we all know (right?) can ramificate the hawk population pretty fierce. They try to determine where the rats are coming in and either plug it up or direct us to (direct someone else to) plug it up, and then they come back with traps and remove the rodents. A week later they do it again, until finally they come up empty.

The guy thought our entry-point culprits were a couple spots at the top of the roofline that looked chewed-on. This would allow entry into the second-floor attic, from which point (said he) they work their way down the walls and into the kitchen attic, which is lower. He wanted me to call a roofer.

This seemed implausible to me. So I didn’t do anything.

Then I noticed poop in the kitchen. Near the sofa. I swept it up. The next day, more poop. I’m a huge proponent of denial when it comes to problems, but finally I pulled the sofa away from the wall and found many more poops, a scouting party of ants, and a neat cache of Iams Healthy Adult Cat Kibble. I read up.

Two of the traps were sprung and all the peanut butter licked off without sign of violence.

Rats don’t hunt much if they don’t have to. They forage. Kibble is super easy to transport and store. It’s better than rooting through the Dumpster. It’s convenient.

The sofa didn’t smell right. I blamed my nose for a couple days and then turned the sofa over. There was a hole in the dust cover fabric. I cut the fabric off. Ten thousand turds tumbled out. I threw out the fabric, cleaned up the turds, sprayed everything in sight with everything this side of napalm, and considered myself lucky I foiled them before they could bring in the tiny TV for the Spring Break Party. Also, I put away the bowl of cat kibble every night. If Tater gets hungry, she can just go find herself a rat. And I called the roofer.

It isn’t much different with climate change. It’s the poop that betrays us–all that carbon we’ve hauled out of the earth and shot into the sky. And if we want to do anything about the poopetrators, first thing we have to take away the kibble. But we loves our kibble. We wantss our kibble. All that plastic packaging, and heat and AC at the flick of a switch, and instant transportation? It’s so convenient. Mmm, kibble.