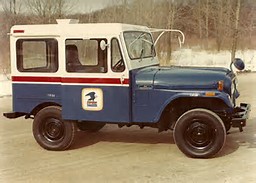 So they’re going to redesign the Postal Vehicles again. Probably a good idea. Mail carriers deliver mostly packages now and their vehicles are set up to deliver antique letter mail from twenty years ago. But they used to change the vehicles every now and then just to rattle the crew.

I personally preferred the ones we started with in the ’70s. They were little right-hand-drive Jeeps and you could reach everything you needed from the front seat without dislodging a butt cheek. Each one had its own idiosyncrasies. If you were a lowly sub, you’d get to choose something particularly quirky from the bottom tier of the fleet. It took a certain amount of mental agility to switch from the one with the window that wouldn’t go down to the one where you had to stand on the gas and the brake at the same time to modulate your speed. I hadn’t been working there too long before the day I tried to save time by sliding open my door as I was coasting up to a stop, and it slid clear off its rails and cartwheeled down the street behind me. Fortunately no bystanders got decapitated but I do remember looking in my rear-view mirror and thinking: even without a decapitation event, this isn’t ideal. I could probably get in trouble for this. But I backed up, hauled the door off the pavement, and stuck it back on the rails good as new, making a mental note that Jeep 998 is the one where you have to be careful of the door, and if I had a choice, I’d try to get the one where the engine didn’t turn off even when you took the key all the way out. Because that one had a stellar emergency brake.

Big change after the first couple years. The Jeeps were repainted WHITE red and blue from the former BLUE red and white. The extra paint gave the rivets a little more integrity. We got used to the white. Everyone liked to use Route 532’s Jeep because the carrier, a neat dresser with aviator shades and a lounge-lizard beard, had it tricked out with wall-to-wall carpeting. For me, it didn’t make up for the cigar stench or the fug from the pine-tree deodorizer.

The Jeeps were troublesome but entirely too useful and soon enough we had them all swapped out for Ford Pintos. The big hump running down the middle for the power train proved to be a pain in the ass to arrange mail trays around, but worse, Pintos were already famous for blowing up whenever someone tapped them on the rear bumper, which is probably why the Postal Service got them cheap. And whenever we drove them up to a stop sign, we could hear an ocean of fuel sloshing back and forth underneath us like an ominous tide. It was like straddling a low-tech rocket. For the first time, we had three-point seat belts, too, so we wouldn’t be able to bail out immediately when we were set on fire. Nobody missed them when they were towed away.

A few forgettable station wagons (K-Car? Aerostar?) were trundled out and abandoned and then they 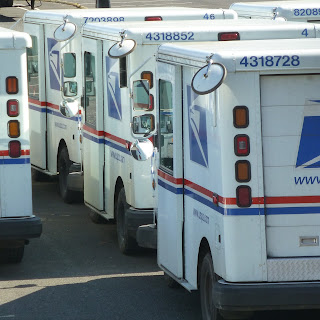 came up with the first vehicle specifically designed for us, and not whacked together out of an existing fleet with extra trays bolted on. The LLV was supposed to last for twenty years, and maybe it would under the care of someone who had purchased it for personal use, but the best of us sought only to keep the daily damage to a minimum. The LLV required actual training to operate. It was an opaque box. There would be no looking over your shoulder to back up. Instead, it was decked out with dozens of mirrors on all corners, some of which were aimed at other mirrors so that you could make out what you were about to back into, as long as you knew which mirror to check and as long as it wasn’t raining; and some of the mirrors were purely there for extra jazz. Most of us were never sure if we were looking at traffic coming up on our left, traffic behind us, or a video of little toy cars. We each had half-day training on the LLVs and were pronounced good to go as soon as we could drive five minutes without crushing an orange cone. 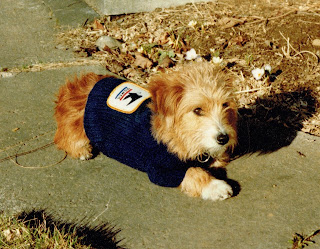 Within a few months all the predictable problems were solved by a new edict from Management that we were no longer allowed to put our vehicles in reverse. This meant we couldn’t get in or out of the garage. The edict was altered slightly so that you could put your vehicle in reverse if no one was watching, but if you hit something, it was totally your fault because they warned you.

These are the vehicles that are being phased out now. The new ones will allow you to stand up in the back and have lots of room for packages. The mirror situation probably won’t have improved. If you have to track the trajectory of your sliding door as it goes sailing down the street now, you’re probably out of luck.