Requiem for a Biology Degree 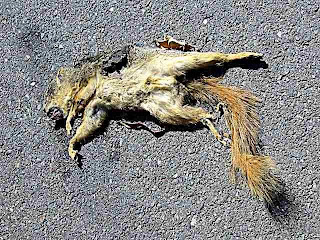 I saw a flat dead squirrel today on the road. I can’t bear to look at them when they’re still gooey, but this one was as flat as a cartoon coyote. It occurred to me that it had really been quite a while since I’d seen a dead squirrel. Used to be, the city was chock-full of suicidal squirrels. As soon as I saw a squirrel dash ahead of me when I was driving, I would slow down or even stop, because it was guaranteed to double back to see if it could get under my wheels. I’d wait until it got all the way to the nearest tree before I’d drive on.

I have a theory about this. The reason squirrels are so whacked-out around cars is that they evolved to evade eagles, not Expeditions. If they run to and fro, and try to mix up the “to” and the “fro” a bit, they might escape death from the sky. I’m thinking that in a matter of forty or fifty years, the city squirrel population has finally evolved to reward the individual that just goes full-tilt in one direction. Because even though I still tend to slow down around racing squirrels, they don’t seem to double back the way they used to.

It’s either very urban of me, or very lazy, to make a study of dead fauna. I should be able to do better. I do have a dusty old Biology degree, by now vestigial. But you study what you can, and the dead stuff doesn’t take as much stealth. So I noticed that another thing has changed. Years ago, we were awash in squashed opossums. Of late, they’ve been almost entirely displaced by dead raccoons. Did the raccoons eat the possums? It seems unlikely, possums being so stringy and greasy-looking and all, but raccoons eat a lot of things, so maybe they eat possums; after all, in some parts of the country, people do too. And they’re huge (the racco

ons, I mean, although some of the possum-eating humans can run a little large). I remember when they used to be medium-sized and cute. Now they stand there, leaning towards you, not backing away, looking at you eye to eye behind their villainous masks and rubbing their hands together like assassins. My night vision isn’t that great, but the last one I saw was the size of a Volkswagen, had tusks and was swinging a tire iron. I don’t remember them being so big before. That’s one reason I think they’ve eaten the possums. Oh, sure, you hear about the natural shifting of fortunes of different species occupying the same ecological niche, with one population gaining temporary ascendancy due to variations in food availability and vulnerability to parasites. But one thing I learned in science was that the simplest and most elegant solution is often the best. So I’m sticking with the giant possum-eating raccoon hypothesis.

There’s an impressive pile of poop under our grape trellis, all in one spot, and since I’m not out there at night checking, I don’t know what has produced it. I do, however, have a field guide to poop, and I consulted it. My bookcase is a little light on literature, but I feel sort of proud of keeping a poop guide handy, and so I mentioned it to my sister, who was not especially impressed. She has a poop guide too. I think this says something about our family. For both of you still reading, possum poop is reported (“unfortunately,” adds the guide) to lack distinctive qualities. Raccoon poop, it goes on, is not tapered at the ends, but is more or less broken-off. I see that as careless and lazy on the part of the raccoons. The guide says raccoon and possum poop are easily mistaken for each other, and in both cases they vary according to what is being eaten. I do not know if the poop of possum-eating raccoons is distinctive.

I do know they’re up to no good. Poop should be tapered.