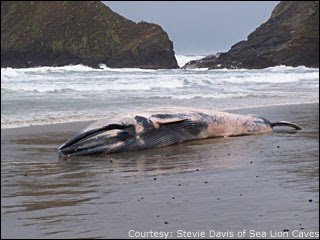 A fin whale beached itself near Florence, Oregon the other day. That hardly ever works out for the whale, and it didn’t this time. There’s always a lot of speculation over the health, physical and mental, of a stranded whale; what could cause it to heave up on shore? Was it itchy, or morose? Fin whales, being equipped with baleen, eat nothing but small fry and crustaceans, but I’ve been around long enough to know that sometimes it’s the appetizers that will do you in. You get into enough krill, and you just want to go lie down for a while. I’m that way with bean dip.

There was the customary quandary of how you get rid of such a massive dead thing. People are always drawn to these scenes, although I would venture that none of those attracted have ever picked meat out of a mess of crab and discarded the shells into the kitchen wastebasket on a hot July day, thinking it will be okay just overnight. There was talk of towing the whale out to sea, burying it in place, or just leaving it. What there was no talk of was the solution that a very bright person came up with in 1970 when the same thing happened in the same area.

That very bright person, a demolitions expert from the highway division–let’s call him Sparky–reasoned that if a beached whale was set with enough charges to blast it into smithereens, the gulls would carry it away before it hit the ground. If you’ve ever gutted a fish while on the ocean and tossed the bits you didn’t want into the air, you have found that this is exactly what happens. So it was a very elegant solution from nearly every angle except reality. You can be an expert in a lot of things, but no one is an expert in everything. In this case, the engineer in question was sadly underinformed about the bodily integrity of the whale. What you think should happen is not necessarily what happens.

Sparky spiked the whale with explosives. The gulls were in attendance in force. So, unfortunately for Sparky, were the news media. The whale was duly detonated, and instead of vaporized whale shrapnel raining down upon the land, pieces of blubber the size of Volkswagens went airborne and came down upon the citizens and infrastructure of Florence. One chunk came down and cratered a car. Nobody, today, is willing to say it was a fluke.

The entire event was so implausible that, for a time, it entered into the realm of urban mythology, until it was clawed back into its rightful slot in history by those who had been, after all, witnesses. Sort of 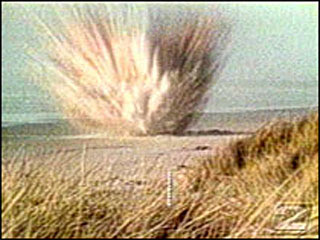 So our current whale was dug into the sands with minor ceremony. It’s a shame. I fear that people will be less inclined to come up with creative solutions to our problems when faced with the possibility of personal humiliation. And we’ll just have to come up with some other way of dealing with Rush Limbaugh.