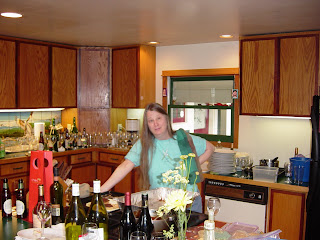 I’m foggy about measurements. I can never remember how far a farthing can go, or how furry a furlong is. And now I’ve forgotten how many units are in a butt load.

This is important, because we are planning a party of sorts; a cheerful wake, really, a celebration of life, and we don’t know how many people to expect. There’s a core group of us who are putting this thing together. Dave and I volunteered our house and quite a bit of the cooking. Among the chores farmed out to others was organizing and keeping track of the RSVPs so we’d know how much to cook. Even though invitations were sent out with RSVP prominently printed on them, we didn’t get much of a response. There’s a whole group of people out there who can confidently go on and on about RSS and URL and ISP and HTML and whatnot, but when hit with an RSVP they go all stupid on you. It’s as though it’s in another language. Which it is, of course, so our friends put out a follow-up reminder which spelled out the obligation a little more clearly. Evidently this worked pretty well, because when we inquired about how many people were planning to show up, we got the following advisory: “Hang on to your hats, there’s going to be a butt load of people coming.”

Most places in the world have gone to the metric system, which is the most sensible system, but here in America we’ve stuck by our old measurements. Having custody of an archaic system makes us feel as though we’re members of a special club. Foreigners might have trouble understanding it, which also thrills us, and we never go anywhere, so we don’t have to feel dumb. There’s just something satisfying about calculating your own height in units which once corresponded to the length of a portion of the King’s anatomy–let’s say his foot, to be on the safe side. And the tradition of using what are, at heart, entirely arbitrary units of measurement goes back to biblical times. Let us not forget how important it was for Noah to get his ark up to specifications, using the correct proportions of rods and cones, so there’d be room enough for the cubits. The cubits must have been the same sex, because you hardly ever see them anymore.

But back to the butt load of people who will be coming to our house. We need to rent plates and wine glasses, so I guess we can just go to the rental place and ask for a butt load of each; we can buy two butt loads of beer, and a half butt load of wine, and we should be good to go. We’ve got the place spiffed up pretty well, and even remembered to make sure there was plenty of toilet paper on hand. I don’t know what made us think of that.

Our friend Tom, who passed on, was living in rural France with his dear wife Linda, who is still there, and who thus can’t make it to the party in his honor. Among her other charms, she keeps a gracious home and hearth and would know just what to do if a butt load of people were to show up at her door. Although, in our defense, I think a metric butt load is a little smaller.