Rolling Out A New Welcome Mitt

With two more primaries coming up on Tuesday, polls continue to show Newt Gingrich tracking well among the pissy, and Rick Santorum is coming up hard on the rear. Concerned establishment Republicans have begun to express doubt about Mitt Romney’s package, and he has been advised to take new measures beyond declaring expediency as a bedrock principle. Work is being done on the personal as well as policy front, with an emphasis on the steadfastness of his positions, including some that are still under construction.

Details are sketchy, but according to his new hair tousler, Mr. Romney and a fresh dog will begin touring the country in a bus, the Rolling Plunder Express. Fidough, a certified pound mutt with a stars-and-bars bandana, will have the run of the top of the coach, where he will bark the bark of freedom. To project vigor and enthusiasm, Mr. Romney will bound out at every stop and roll up his sleeves just enough to reveal Nascar logos on his special holy underwear.

It is thought to be the best strategy to own up to his Massachusetts health care plan, under which all residents are affordably covered, by stressing that this was a youthful indiscretion, for which he is very sorry. He is expected to introduce a bold vision in the health care debate that will slash costs dramatically by endorsing a new line of Christian Science Medical Centers. Those who complain that the franchise amounts to little more than a chain of Jell-O restaurants with no ambience will be promptly accused of waging war on religion. After emotionally recalling his own hardscrabble upbringing in utero, he will unveil a new proposal, which will cover every citizen from just before fertilization to birth, equipping them with tiny little concealed-weapons permits and other protections under the full extent of the law. In addition, innocent future American lives will be saved by the passage of the Sperm Empowerment Act, under which contraception will be defunded and semen delivery system enhancement pharmaceuticals will be offered for free in little candy dishes by the door at Walmart. Failure to enact this will be spun as discrimination against the elderly sperm hosts. Women will benefit, inasmuch as roughly half of the resulting fetuses are projected to be women, after nine months of incubation, labor, and up to eighteen wallet-draining years of care. 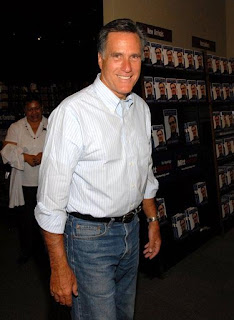 In other areas, Mr. Romney is on record as affirming that the sacred institution of marriage is between one man and one woman, at a time, although he believes certain accommodations might be made to confer many similar rights to homosexual couples, as long as such a union is not called marriage, but rather “a filthy abomination in the sight of the Lord.” He further pledges to podcast a weekly ecumenical Prayer Breakfast featuring plenty of pork products.

On the energy front, Romney will continue to castigate Obama for nixing the Keystone project, which, he will point out, would bring thousands of temporary jobs to America building the pipeline to transport Canadian oil to a gulf port for export abroad, until we have a chance to devastate our own resources.

His experience as a businessman will be touted as giving him unique insight into slashing the bloated federal budget, beginning with the elimination of ethanol subsidies, except in the corn-producing states, and the elimination of all military bases in states with fewer than four electoral votes. Regarding the military budget, its growth will be reined in to two digits. Under the Romney Doctrine, excessive military force will be limited to regions with serious mineral resources, and the grateful recipients of our military attention will be reminded that freedom isn’t free, although we would be happy to work out an extended payment plan.