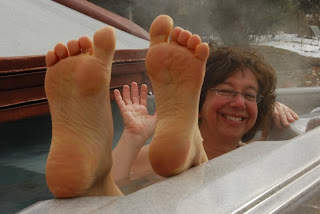 I don’t know what it means to have flat feet. I’m probably missing something. It seems to me that flat is just exactly what your fee should be, especially on the bottom. If that keeps you out of the army, it’s just a bonus.

I don’t have problems with my feet, except first thing in the morning. Evidently they round up overnight. They’re like little spheres, and walking on them flattens them out again, but that first morning trip to the bathroom is a bear. It’s a rocking, rolling, reeling event, and I carom off the walls until they finally funnel me towards the toilet. After that, things flatten out nicely and I’m able to navigate just fine for the rest of the day.

I’ve spent a lot of time working on exercises designed to straighten out my foot-strike and they’ve been largely successful. I can tell because I hardly ever keel over anymore when I’m putting on my socks. I never sit down to put them on, for some reason, and it was always about a fifty-fifty proposition that I’d remain upright, especially when I was putting on the left one. I’d just tip right over. People said it was like watching a dinosaur die. Now that I’ve worked on my foot-strike, I realize that I used to procrastinate or spelunk or whatever it’s called when your ankle rolls in. Dave always asked me, as he was giving me a hand back up again, why I didn’t just let go of my sock, and I really don’t have a good answer for that, except that it simply never crossed my mind. My mission was to get my sock on, and I stayed focused on that mission all the way to the floor. Then I’d finish putting my sock on, get back up and get on with my day. It’s just like figuring out how to do something on the computer. There may be a quicker, easier way, but you tend to stick with what works for you.

My friend Linder has many extraordinary qualities, but her feet are particularly dramatic. They are far from flat, but they’re not round, either. The arches are so pronounced she could tuck a gerbil under each one and not hear a peep of complaint out of them all day. Also, her big toes are normal size, a 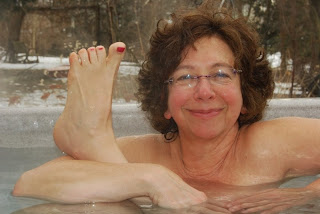 nd instead of the rest of them tapering down like proper little piggies, they’re all the same length, about half the length of the big ones. I’m sure it made bedtime rituals a lot easier on her parents when she was a baby. After the big one went to market, it was nothing but “wee wee wee” all the way home. They’re unusual enough that at one point, when she was completely undressed in the doctor’s office, he suddenly yelled “Oh, my God, look at that! I’ve never seen anything like that before! Hey, Harry! Tom! Get in here, you’ve got to see this!” The fact that this doctor may still be alive to tell the tale, and in his original baritone, is evidence of several of Linder’s extraordinary qualities.

I miss Linder. I wish she lived here so she could have joined us for a sumptuous champagne brunch we had here recently. There was no particular occasion for it, except that we had several large bottles of cheap champagne left over from a party a few weeks ago, so six of us got together and put a nice dent in the stash. A real nice dent. Found out that champagne makes my feet round, too.