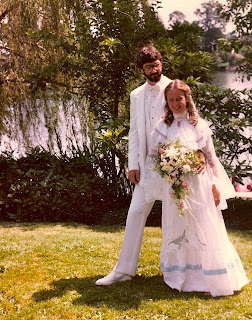 I’m informed that every little girl wants to be a princess and have a fairy-tale wedding, so it must be true, even though I don’t recall thinking about my wedding at all as a child, and only wanted a puppy, and was scandalized when that girl in my fourth-grade class wearing the pink tulle frothy princess outfit won Best Halloween Costume even though I had a neat flannel leopard suit that I had not yet peed in. I might have been unclear about the whole marriage thing at that age anyway. I remember thinking how lucky I was that my parents found each other because the pool of Brewsters is so small. It didn’t occur to me that my mother would have started out with a whole ‘nother name and toss it aside like yesterday’s paper.

I assumed I’d be married some day because that’s what happened to everybody, but I didn’t spend any time thinking about the particulars. As I got older and passed through the hippie filter, I abandoned the idea of marriage altogether. Then I married a man who also assumed he would never marry–that’s one of the things we had in common. I picked him out of thousands, which was possible back in that sliver of time between the advent of birth control and HIV. Actually, we snapped each other up off the bargain table. Neither one of us looked like a good deal at the time, but we gave each other a good seven-year test run, and had gotten used to the rough bits. We gave it a shot. 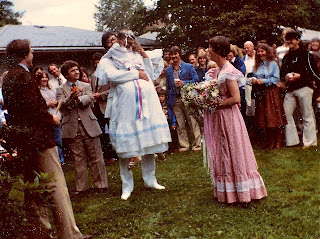 That was 27 years ago. Our wedding, miraculously, was much like the royal affair the world has just witnessed. I wore white; that was a fairy tale right there. Dave rented a tux and didn’t change into his “Just Murred” tee-shirt for hours. There weren’t a lot of hats, but Patty from the Hourglass Tavern did wear her dress sweats. The crowd heavily favored postal employees and bricklayers, which just about defines “common folk.” The mood was ebullient and the vows were punctuated by the popping of beer cans among those who had brought their own to tide them over until the kegs were tapped at 2 p.m. 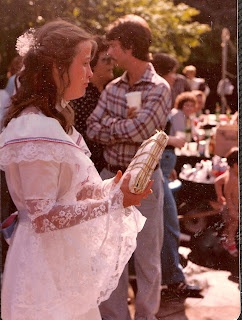 We soon had four kegs of beer going in the back of our 1969 International Harvester pickup with the ice blown in. Festivities included volleyball, and the “sack toss,” wherein people took turns trying to lob a rubber-banded bundle of mail into a standing mail sack, and William and Kate would have done that too if they’d thought of it. We also had a race between two postal employees in which the starter pistol was replaced by an M-80, which was so loud that the contestants froze paralyzed on the starting line. Even with all the money gambled on the outcome, and even though mailmen were involved, nobody had predicted “none” as the winner. 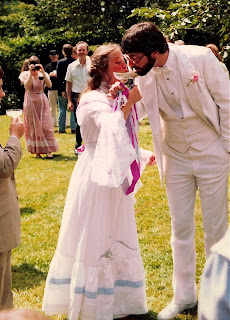 The woman who was in charge of the venue–let’s call her Adolph–had assured us that it was ours till midnight, if need be, but she personally had bet on us being out of there by four o’clock, and took some pains to see that happen, directing that all our food be wrapped up and taken away, not realizing that this group wasn’t going to leave until the beer was gone. That indirectly led to the most striking resemblance between our wedding and the royal do: the attendance of a uniformed regiment. Somewhere around ten p.m., Adolph seized my arm and declared, furious, that one of my guests had just flashed her, and that the party was over. This didn’t seem to be beyond the realm of possibility, but the event she was referring to was somewhat less dramatic. She had shut down the restroom in the hopes that that would make people go home, and was busy hanging up a sign when Leroy, who was next in line for the throne, showed up. “This toilet is broken,” she informed him, and he informed her that he was a contractor (do NOT mess with a blue-collar crowd) and could maybe fix it; whereupon he gave it a test flush, everything looked just fine, and he said (again) he was now going to use the toilet, and she could watch if she really wanted to. She must have, because she reported back to me immediately.

Anyway, it wasn’t long after that than a contingent of Portland’s finest arrived with lights flashing (a theme) and encouraged everyone to leave, and Dave and I repaired to the honeymoon suite at the Marriott with a couple of our wedding gifts: a platter of chocolate Grand Marnier strawberries and a dab of cocaine. We were royally hammered. A good time was had, if not remembered, by all.