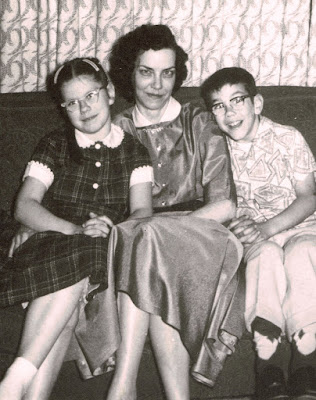 Dave and I can’t watch post-season baseball when the Chicago Cubs are doing well without thinking about his Mom. Murry was a huge Cubbies fan.

Right now, though, she’s in a small ceramic pot. At least some of her is. We got custody of the pot of Murry after another death in the family, not that we asked for it: we did not. But we reluctantly took the jar in, and it was immediately followed by two good-sized golden cardboard boxes full of the rest of her, in case we ever need to top up the pot.

We don’t want to top up the pot. We never wanted any ashes in the first place. We are rational people, and ashes are ashes and dust is dust. Once someone has been rendered to a vacuumable condition, we’re pretty much done with that person, except for the love and gratitude and regret and maybe a good recipe. The problem with ashes is you can’t just throw them out, unless you do so with ceremony in some meaningful fashion. So they’re a burden.

And we know what we’re supposed to do with Murry’s ashes. We’re supposed to sprinkle them on Wrigley Field. Memory is unreliable, and reality comes down to whatever you’ve managed to make up over the years, so we no longer know if we promised her a home in Wrigley Field or if we thought it up after she died. I’m quite certain we imagined the ceremony as a spray of fairy-dust in the breeze, a flick of the fingers, and not the bucket-dump in the ivy wall it would have to be. They frown on this sort of thing in Major League Baseball anyway, and if we were to let fly with both golden boxes and the pot, we could blind a fielder.

I resent the way inanimate things like bone dust or sorrow insinuate themselves into your life and start ordering you around. Streaks do the same thing.  They have power they shouldn’t have. There is something sacred about a good streak, and the winless streak of the Cubs, who have not prevailed in a World Series since 1908, eight years before Murry was born, is as sacred as they come. My own Red Sox had a good streak going too, but it was snapped in 2004, and they’ve done rather well for themselves since. I’d be happy for Cubs fans if they win this year, but it would ruin the exquisite purity of their suffering. And they’d miss it. I know this. I still root for the Red Sox, but success has diluted my fervor, and now I don’t care as much if they win, as long as the Yankees lose. 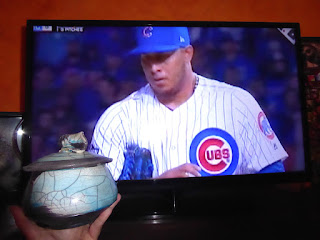 Neither one of us believes Murry is now in any position to celebrate a Cubs victory. We’re rational people. That will not stop us from giving her credit for having some kind of influence if they win. And that is even though we never blame her when they don’t. And even though we don’t think she’s anywhere inside the pot of ashes, we can’t throw them away. Rational only gets you so far.

In 1989 Murry slipped out of the sphere too early, but with no struggle or fuss. She was found sitting up in her chair, the newspaper in her lap, her coffee cup by her side, and the Cubbies on the TV. That is either completely true, or we made some of it up. We don’t know anymore. But sometimes you true a story the way you true a wheel, so that it rolls smooth. Murry loved us and her grandkids and coffee and the Chicago Cubs. We trued her life.