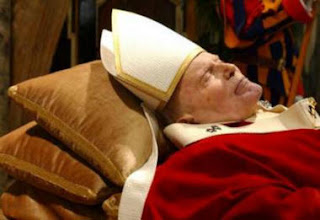 There’s controversy brewing over the impending beatification of John Paul II. It’s too speedy, they say. He’s only been gone six years, and you can’t even get on a stamp until you’re ten years cold. J.P. may have been adorable in his beanie and red shoes, but he’s just not dead enough for sainthood.

I don’t know how dead you have to be. In fact the entire business of generating saints is a mystery to me. It seems like the sort of thing that God should be in charge of, if anybody. Anything that’s done by committee here on the sphere doesn’t seem like it would be that valuable to the deceased. It’s hard for me to visualize the holy candidate looking down with his fingers crossed–I assume down, and I assume crossed–like any other Hall Of Fame hopeful. He has to be beyond such concerns now, and after all, while alive, he got to be pope, and you’d have to be Donald Trump to think you’re more important than that.

Some people have been critical on the grounds that numerous personnel who are expected to weigh in on his fitness for sainthood owe their jobs to him and can’t be expected to be impartial. It’s a scurrilous charge, implying they offered him the ultimate golden parachute to land a position. “Put me in as Bishop of Los Angeles, and I’ll totally vote for you for saint,” they’d say. I’m cynical, but even I doubt it.

There’s only one pope at a time. Oh, there are fake furry ones with big hats, but everyone knows the real one is the one in Rome. I don’t know why he gets called a pope and a pontiff as though there were a distinction. You don’t hear anyone calling a moose a mastiff, or not more than once. Anyway, even if they’re infallible, which I might be wrong about, they don’t all make the grade for sainthood. You’re supposed to perform a miracle, which by definition is something involving blood and suffering and visual disturbances that cannot be adequately explained. Menstruating girls with migraines would be a lock if these things were fair. 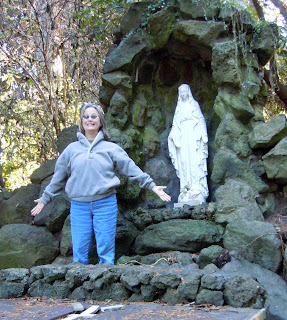 Other objections pertain to John Paul himself. Evidently he was way too involved in ecumenical affairs to go for the glory. He famously organized a peace prayer for people of all faiths and that is no way, sir, to promote Catholicism. No, the flock is supposed to be increased by keeping the club doors shut and the condoms off. But John Paul II wasn’t that kind of guy. He had the big tent philosophy, threw his arms open to all, Poles and Italians, capitalists and communists, pedophiles and children, the whole family of man. With the little women doing the cooking and cleaning.

Somewhere in my Lutheran past I recall being informed that we were all saints, and that’s what was meant by the Communion Of Saints–us. Even as a child I thought that devalued the brand. I didn’t feel like a saint and I knew darn well Mr. Oldham wasn’t, as he fumbled for communion under my choir robes. I don’t think it’s a good idea to dispense flattery like that. You spend enough time telling all the kids that they’re smart or athletic or talented or saintly, you just lose your own credibility. Then the kids grow up to be bored, dissatisfied, aimless, unholy, and too cynical to vote, and that’s why gay marriage isn’t yet the law of the land. It’s the Lutherans’ fault, not the Catholics’.