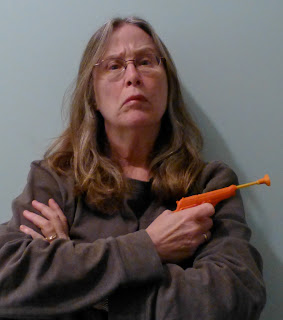 Newtown CT is the epicenter of a radiating pain.
All across the nation people are clutching their children or
their guns to themselves, depending on which they fear for most.

I’m ambivalent about the Second Amendment, but I do know
that a nation awash in junk food is going to fatten up, and a nation swimming
in guns is going to suffer some casualties. I have many friends who are fond of
their guns and have become persuaded that they are on the verge of having to
hand them over, usually to some malevolent force called “the government.” The
government, in this land, of course, is us, and sure enough, although few
politicians will tilt against the NRA, there are a whole lot of plain citizens
who would like to thin out the arms inventory. So I guess we are the malevolent force. I rarely chime in on this issue. I don’t warm up to guns, but I am
willing to accept that other good people feel strongly that they should have
some.
It’s the infamous “slippery slope” arguments that irk me:
the notion that gay weddings will eventually cause people to bang their own
dogs; the idea that giving people some control over their own deaths will lead
to the establishment of gas chambers for grandma. There’s precious little
possibility that Americans are ever going to be stripped of the arms they need
or want, but that’s the bottom of the slippery slope the NRA has sold its
adherents on, certain that we will be helpless to halt our skid. The slope goes
both ways, of course. If we the people decide it’s okay to arm ourselves with
assault rifles, why not multiple-grenade launchers? Why not nukes? Where do we
draw the line? Can we talk about it without being hysterical?
There’s never a good massacre, but the ones that claim our
children hurt us the worst. Once we’ve gotten a little age on us, we’re
barnacled up with everything from annoying quirks to outright evil, or mental
illness, which sometimes looks the same. So we care the most for our children. We
presume them innocent. That’s an arbitrary distinction we make on the spectrum
of life, a spectrum that some believe even includes the aspiring souls of
sperms, but most of us make it. And we might just as well. We’re liable to make
better decisions if we make them on behalf of the children. Especially if we
include everyone’s children. There are families in Africa and Syria and Iraq
that are suffering the same pain and terror as the families in Connecticut, but
magnified, and endlessly. Bombs fall from the sky and the streets are flooded
with personal weapons of mass destruction. We know because we provided them,
for a price, and the only voices in our heads were those of the arms merchants
and the fear merchants and the oil profiteers, operating under cover of our apathy.
So what do we do for our children? Do we start to stem the
saturation of arms? Do we devote more resources to mental health? Do we finally
get up the gumption to say hell no to the depleters of the earth who are so
willing to trade our very survival for money? If we think only of what’s good
for our kids, we’ll be on the right track.
By Murr Brewster|2021-11-09T21:05:27-08:00January 2, 2013|Uncategorized|60 Comments