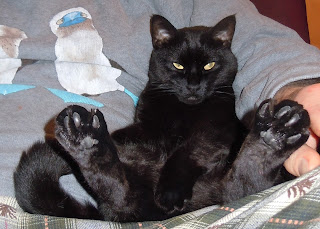 By the time you’ve had a cat for seven years, you like to think you’ve got her sized up, and understand her motivations and her predilections, and are only left with the occasional isolated query, such as “does that belong to you?” and “where are you going with that?” and “is that what we do with Mommy’s slippers?” But like any beings sharing a confined space, you have developed an understanding.

Larry liked to eat. And by the time we’d taught her to shake hands and roll over and a few other things she learned to do for tidbits, she had tidbitted up to a sort of tortoiseshell football shape perched on dainty little feet. Visitors took to calling her “fat cat” but I thought it was slanderous, until the day I noticed that when she rolled over on command, parts of her just kept rolling. She’d get fish flakes and kibbles and a tiny portion of wet food and completely lose control if we had chicken for dinner, which drove her to petty crime. 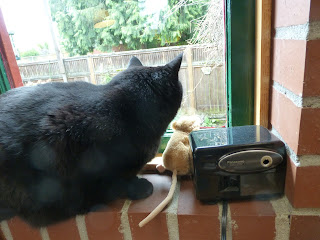 Tater, on the other hand, does not give one shiny shit about food. She wants her maintenance half cup of kibble every day to top up the tank, but nothing else interests her at all. All she wants to do is play. All. She used to fetch those little fuzzy plush mice, and that was terrific, because I could play from my chair, but then she quit bringing them back. Dave rigged up a green mouse on fishing line and that’s her very favorite game. Every day she goes and sits by the closet that the green mouse is in and acts pitiful until he comes out. She interprets every human activity, from napping to quilting to working on taxes, as a sure sign we’re ready to play too.

So when the woman who was looking in on her in our absence reported “I think she’s bored,” we were struck by dread. We imagined coming home to a house with all paper items spindled or serrated, and a lot of progress on her ongoing Gravity Project, wherein every household item is relocated to the lowest possible point. It’s been a passion of Tater’s for years, and she’s grown accustomed to the noise.

So while Larry had no toys at all, Tater has a whole box of them. All of them, balls and mice and feathered doo-dads, are battered and flayed. When all the fuzzy mice start to look like mummified thumbs, Dave brings home a new set. He’s calm about it. He’s like the conductor of the cattle car heading to Auschwitz. It’s not going to go well for the new mice. 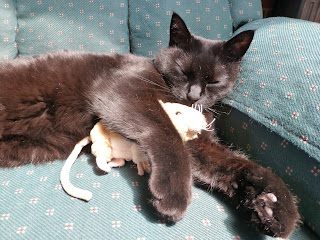 The other day Dave came back with a new toy for Tater. It was a little stuffed gerbilly fellow, and he just had a good feeling about it. I had a bad feeling about it. She already has a stuffed kiwi bird, and she takes that out for a good disemboweling from time to time, after which I gather up and re-stuff the polystyrene guts and sew the bird back up, which always makes me feel like one of those evil dudes who re-creates virgins for a paying clientele. Tater ignored the gerbil.

But then one day Dave was taking a nap, or “watching golf,” as he calls it, and I had stepped outside, and within seconds I started hearing this mournful low howl, rroowwWWRRrrooowwWWRRRrow, which sounded like a cat but certainly not our cat, who has a high squeaky voice. I was alarmed. I figured Tater had cornered something I didn’t want to know about, or she had pulled the refrigerator over and pinned herself, or something, and I ran inside to find her cradling her gerbil. She instantly strolled away and emitted a normal squeak. 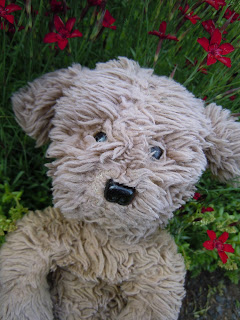 Now we hear the mournful low howl at least once a day, always accompanied by a surreptitious relocation of the gerbil, who remains unmarred. If you toss the gerbil, she does not run after it, but waits until we’re not looking and removes it to a different room. Obviously she cares deeply about the little fellow.

I think it’s ridiculous, having such strong protective feelings about a stuffed animal. Pootie thinks it’s stupid too, but then again he thinks cats in general are stupid.