“Screwball Central, How May We Not Be Of Assistance?” 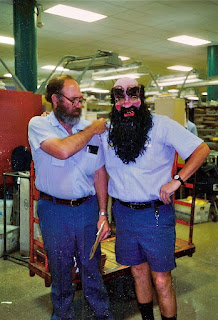 According to news reports, a postal carrier in Columbus, Ohio called a man a homophobic slur and then cut off his mail, as it were. “You homophobic slur!” she almost certainly didn’t say. We know what she said. This disturbs me on a couple fronts. Starting with the postal part.

I carried mail for 31 years. The Postal Service, admirably, hires every kind of screwball there is as long as they can read an address, or screwballs with a lot of veteran’s-preference-points if they can’t. As our friend Stricky used to say, shaking his head at the inane patter du jour, “We’ve got ’em all down here.” And durn near every one of us considered our duty sacred. We even had a name for it: “the sanctity of the mail.” So no matter what brand of personal idiocy we subscribed to, we got the mail through.

It’s possible this doesn’t apply anymore. The job is different. The carriers have bar codes tattooed on their asses during Orientation and are constantly tracked in the system like the letters themselves, which is not a policy designed to elevate morale or foster personal pride or encourage initiative. It encourages trudging, is what it does.

But maybe other things have changed too. Maybe there’s some new Religious Jerkwad Freedom Initiative that’s allowing letter carriers to discriminate and harass on the basis of the deeply held belief that some people are too icky for mail service.

I watched the video of the carrier in question. It all started when the gentleman tried to reach for his mail when the entire residential gang box was open instead of waiting until he could use his own key. This is a postal no-no. I used to cheerfully remind grabbers that I was so sorry, but I couldn’t allow it because of security concerns, which I was sure they’d understand, but I’d be done in a jiffy.

“But you just handed that lady her mail!”

“Yes, but I do know who she is,” I’d say, usually without actually adding And she gives me twenty dollars at Christmas time. 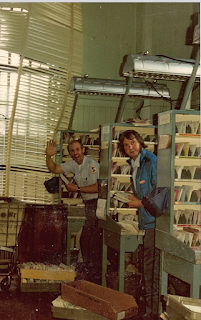 But personal animus never entered into it. What I did not do is say “I’ll be done in a minute, Spanky Pants, so you can keep your fat pink capitalist hands off those letters, which are my letters until I shut this box, and if you do not take three steps back this instant I’m telling your wife about that little chippy in Accounting, and telling everyone else that you order adult diapers.”

Because I am a nice person.

There are a few legitimate reasons to quit delivering your mail. If, for instance, your unrestrained wolf hybrid threatens me, that’s it for your grocery circulars and election flyers. Even more fun, I can quit delivering mail for the whole block. That’s the trick that usually gets your attention. Unfortunately for me, I’m supposed to deliver a Bad Dog letter to you first, to explain things.

Not sure the Postal Service thought that one through. 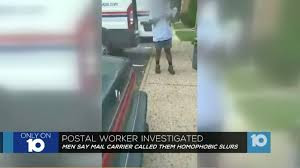 So is this incident similar to those poor persecuted bakers who thought making a wedding cake for women was their first station on the train to Gomorrah? Hard to say. If that was an ethical stand, which I contend it was not, this incident falls somewhere below it. This is just an asshole on a power trip. Mail carriers don’t have many ways to power-trip, so ripping someone’s name off his mailbox and stomping off is about the limit. And it should be a firing offense.

The second thing that was disturbing was that the asshole in this case was a black woman, which goes completely against the narrative. I count on black women to have a much better grip on matters of justice, and although it is never fair to generalize, I’m still disappointed. If some representative of the Postal Service is going to go rogue like that, I want that person to be a recognizable deplorable of some kind. Any of your standard villains. Or at least a man.