Slightly Above It All 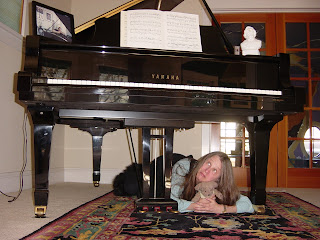 It’s been a few years since we’ve had a Hundred-Year Flood, so we’re about due. No one’s ruling one out this year. We’re having no shortage of rainfall and some people are right up to their beanie baby collection in the stuff. That’s the sort of thing that floats to the surface of the mud and the crud when someone’s house floods, and that’s when the television crews come in and take pictures. It always looks a right mess for sure, and no one likes to see someone lose everything. But some of it is hard to get real worked up about.

There are all sorts of ways to lose everything, and Dave and I are pretty well situated to avoid most of them. We don’t get hurricanes or tornadoes. Our house is on a little high plateau so we’re not going to have a flood or a mudslide. We don’t have the kind of vegetation or topography that makes us prone to wildfire. We do have a pair of thriving burrito joints within a half a block and it’s possible, what with the grease and all, they might go up in smoke some day. They also have rats out back, but that’s not so much a disaster thing as it is a pestilence thing. Whatever it is the rats do, though, they pretty much do it under cover of darkness, like Dick Cheney, so if you choose to, you can pretend they’re not there and not up to anything. The burritos are delicious. I don’t know what the meat is, because the menu isn’t in English, and it’s probably just as well.

So I’m happy on my little plateau, because mudslides and the like give me the willies. Many of us who are ignorant of house construction tend to think of buildings as being solid and immutable, and when we look out at the scenery around us, we rather expect it to stay put also. I remember how utterly shocked I was when, once, at a teenage friend’s house, a bunch of us were laughing and playing grab-ass and suddenly Elaine backed heavily into a wall and went right through the sheetrock. I didn’t even know about sheetrock, and saw the walls as being solid and unyielding things, although if anything was going to be able to punch through a wall it would have been Elaine’s rear end. But around here, lately, entire hills come loose and knock houses right off their pinnings and sometimes the houses slide right into other houses and so on, and then the whole neighborhood has to pack up and leave in case God was planning on picking up the spare.

What we do have, even here on our plateau, is the imminent likelihood of a catastrophic earthquake. Evidently we get one of those every five hundred years or so, and it’s been about four hundred and ninety-eight since the last one. And it’s supposed to be a doozy. Down in California, they have earthquakes as regular as garbage pick-ups, and some of them are pretty strong. But here, all that energy is building and building, unbeknownst to us, and getting ready to rear up and tip us into the ocean like a plate of peas. Meanwhile, we’re not even jiggly. It’s like what they say about mosquitoes: only the males make noise, and only the females bite, so if you’re lying in bed at night and you don’t hear anything, that’s when you should worry. None of us can hear a thing. We’re doomed.

I haven’t made any plans for an afterlife. I’ve been busy. But I do plan to scurry under my piano when the big one hits. It’s a seven and a half foot Yamaha grand with a hell of a bass, and it should hold its own pretty well if chunks start falling out of the ceiling. And if the whole thing comes crashing down on top of me, well, that’s just the way death should sound.