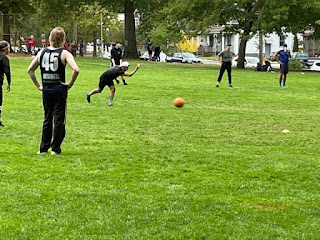 Dave and I love baseball or anything like it. Softball, Little League, beer ball, it doesn’t matter. So when we saw a bunch of people on the field at the neighborhood park, we hurried over to watch.

Something about the structure of the game fits my interior life like a ligand on a macromolecule. Or an mRNA sequence on a viral membrane. You get the picture.
[No, we don’t.]
Okay, baseball just plain matches up to my insides. I watch baseball and life snaps back into place and everything makes sense again. Don’t ask me how. I don’t question these things.
Anyway, once we got to the field, it turned out to be a distant cousin to baseball. “My word,” I said to Dave, antiquely. “It’s adults playing kickball!”
I hadn’t seen a kickball game since I was in one. I loved that game. If one kid on the block had one of those big plastic dime store balls, you could play it in the street. You had to work out the baselines according to whose car was parked where. The adults who were assigned to any of us kids liked the game fine, because we were “out from underfoot.” Unrelated adults were annoyed. They didn’t like seeing all these greasy kids smearing up the fender of their Pontiac rounding third. And if they were actually driving, everyone was annoyed. We kids were annoyed because we were expected to step out of the way so the car could get through. The drivers were annoyed because nobody ever stepped more than three inches further away than they figured the car needed, and then the kids were annoyed all over again because the driver took so long to squeeze through, pounding his steering wheel and using language we weren’t supposed to recognize. Then it was back to the game.
But I sucked at it every way you could. No skills at all, couldn’t kick, couldn’t catch, couldn’t throw, couldn’t run so’s anyone could tell I was running.
My memory sucks too. I remember only the seminal moments of my childhood, in three categories: the humiliations. The triumphs. And the times I got in trouble when I didn’t think I deserved to. (This third category is by far the smallest. Mostly, I knew I had it coming.) Kickball once furnished such a moment across two categories at once: triumph followed almost instantaneously by humiliation.
I was playing second base. And, in a plot twist, I was playing baseball, for the very first time. I was no more than eight and had never seen anyone play baseball–apparently, our television only got Huntley-Brinkley. But they said it was just like kickball. The batter swung and squeaked a dribbler out past the pitcher and to everyone’s shock and amazement I corralled it somehow, and to my shock and amazement the runner on first was just then passing by on the way to second, and holy moly I threw that baseball and thudded it right into the runner’s body even though I was fully four feet away from him at the time. I had never gotten anyone out in my life. I was a dang hero!

For one second. The runner kept going and made it to third and all my teammates were howling and groaning and waving their arms and I was given to understand that in this game you do not get a runner out by whacking him with the ball, even though that’s exactly how you do it in kickball. Presumably, a person could hurt someone throwing a softball at him. I couldn’t, but a person could. I’d never successfully either caught or thrown a kickball but I’d certainly had them thrown at me. It was possible to knock me all the way off the base path into the infield and I do believe a number of the bigger boys rather enjoyed seeing how far I would carom, as though it were a game of human marbles.

Anyway, the young adults at the park were indeed playing kickball. I struck up a conversation with one of the spectators on the sidelines. “Wow!” I said, antiquely. “I used to play that when I was a kid!”
“Huh,” she replied, looking me up and down and lofting a thought balloon in which I could clearly be seen in knickers and a jaunty wool cap rolling a hoop down the lane with a stick.
I watched for at least ten minutes. I never saw one player catch a fly ball. I never saw one player throw anyone out. I never saw the other team take the field but they didn’t run very well. They all kind of sucked.
They were my people.
By Murr Brewster|2021-11-29T16:39:40-08:00November 24, 2021|Uncategorized|15 Comments