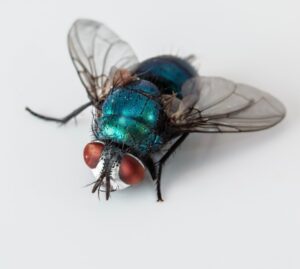 Some people refuse to step on bugs because they do not want to cause the death of another living thing. I salute them. On the spectrum with guy-running-over-an-animal-for-fun at one pole and them at the other, my needle swings wildly their way. It gets complicated though. Every step you take will mash something. It’s a matter of what you can perceive.

I have a few dozen flies in my house right now. No doubt some people would refer to this as an invasion. It’s really not much of an invasion. It’s more like if a drunk wanders through your unlocked door by accident and you find him curled up on the floor sleeping it off. It’s not ideal, but you don’t feel all that threatened. These flies strike me as deficient in intellect.

These flies are big and slow. Just to see if I could, I snuck up to one crawling across my counter and put my hand over it easily. Now I have a fist with a fly in it, feebly buzzing away, and I can’t bring myself to kill it, because it’s so pitiful. If you’re a fly, and I can catch you? You are not a credit to your race.

I’m small and slow. I am so slow that if I were in the batter’s box and on the receiving end of a fastball, my swing would probably take out the on-deck batter as she meandered up to take my place. Some people have quick reflexes and reaction times but mine are more deliberative. Mine don’t want to jump into anything without ruminating a little first. In a bygone era, my name would be Tiger Chow.

So here I was in the unprecedented circumstance of having a fly in my hand, and none too happy about it, really, having never anticipated it as a possibility, and although I am not too delicate to use a swatter, I’m far too squeamish to squish it manually. I thought about letting it outside, but it seemed happy enough, so I decanted it back onto the counter to let it lurch and launch and dawdle around in the airspace like a doomed zeppelin and eventually keel over and plop to the floor. There’s already a bunch of those scattered around. Some kind of spring hatch from the Diptera Halfway House, none of them fast enough to generate any buzz.

I looked them up. Why are my flies so slow and pitiful? Were they born old? Google something like this, I’ve learned, and your first ten hits will be from pest control outfits. And if their information is to be trusted—and it probably can be, although they’ll explain how a given insect is completely harmless but you should kill it anyway—these are not developmentally-disabled versions of your average housefly, but a different species altogether, a notably poky one. The cluster fly.

I don’t know why, but the first five of these fat bastards I found were dead or napping on my bathroom floor. I treated them with my vaunted housecleaning ethic and, not caring to step on their considerable meat with my bare feet, nudged them over to the baseboard with my toe until such time as I felt up to disposing of them. No one knows what time that is, exactly. But I have in mind that I could line them up on an olive tray and present them to my chickadees.

Such tiny birds! I’d probably have to saw my flies into steaks first.